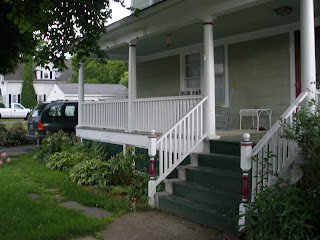 I didn't think Spring was ever going to come this year - every time there was a little nibble of a nice day, it was followed by a rapid drop in temperature and several bad days. From what I have seen, its been crazy all over the US! I think Kansas got more snow than we did! We traveled out to Kansas in March to see our daughter's ordination. We weren't three hours from home when we hit snow, which followed us all the way to our first stop in Ohio. Luckily we only had some little burst of snow the rest of the way out there. Normally Kansas is a bit warmer than upstate New York, but we had so much snow Palm Sunday that we couldn't make it out to church - probably the first time I have missed Palm Sunday in my life!

Once home 4 weeks  and 4,500 miles later, I was eager to start gardening. Usually in April I go to several of our local nurseries to look at their stock of bushes and flowers that can be planted early. I really want to get one of the newer everblooming hydrangeas like Vanilla Strawberry or Endless Summer

Sadly I haven't sound any locally - nor could I find "Happy Chappy" groudcover roses  - only two places carry them, and i didn't move fast enough to buy them - isn't that always the way? For years I have wanted the Happy Chappy Rose tree, but never had the money to buy it. This year I finally have a bit to spend and I still can't get it - isn't it lovely though? I hope next year I can jump on this - someone told me Jackson& Perkins went bankrupt - I really hope that isn't so. At any rate, I bought a Chicago Peace rose, a beautiful yellow rosebush and a fragrant red.

My garden hasn't been particularly good for roses in the past - I keep getting that black spot fungus no matter how much I spray, but this year I have pre-sprayed them for the fungus, got rid o the really pathetic ones that only have one branch left and am hoping against hope to have some beauties to cut this summer.

That being said, as soon as the sun popped its head out, I went immediately to my heirloom cabbage rose bush to clean it out. When we first moved here 15 years ago, there was this little ring of roses around the front tree. Our neighbor said she had tried many years to get it to spread, but never had any luck. I don't have the greenest thumb, that award goes to my mom, but I do pretty well. So I set about to clean up what was there and said a little prayer. Well, have they blossomed - they are taking over not only my driveway area, but spreading over to my lovely neighbor with the brown thumb! I try very hard to attend them every spring, but I must admit it has been two years since I did any work out there -I planned on it last year, but my daughter was getting married in September and time just slipped past. What I was left with was a huge mass of unruly branches with dead and broken branches holding down the live ones - then I also had to deal with about 6 inches of leaves from the past two fall seasons as well as a few Maple trees that have invaded! I have been out there every day for a week now and am finally done.

I had some lovely things happen while I was out there working away - my neighbor came over and told me that he watches me out there most every year slaving away and knew that it was a labor of love for me - and it is. Another lady came by and asked if she paid me, could she have a few branches to plant - she had smelled them a few years ago coming out of the funeral home from her mom's wake. The scent immediately brought her back to the house she lived in as a child and made her think of her mother. She has spent the past two years trying to find the same plant to put in her garden with no luck. Of course I said yes, but that she should just take some for free. She came by Sunday to dig them up and left us a beautiful apple pie as a thank you. Yesterday, a friend asked could she have a few as well. I am happy to share them - they have brought me so much happiness every spring as I sit on the porch and drink in the lovely scent. 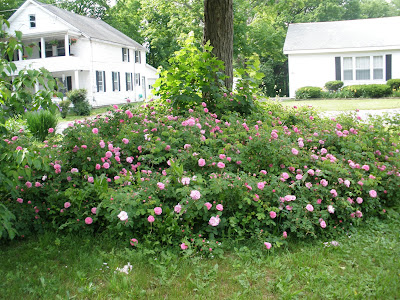 Posted by linda lemons at 6:26 PM No comments: