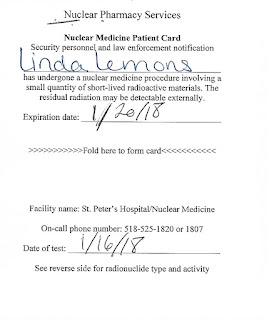 Well, yesterday I went to Nuclear Medicine to get a renal scan - pretty easy to have done - other than trying to find a vein in my arm - I have veins that liked to run and hide when they got stuck. After one try, the tech got someone else who used a teeny tiny needle meant for children to get the IV started, then they shoot you up with radio isotopes and lasix and you just lay on your back for a long time! However, because of the lasix  you have to urinate every 5 minutes because it stresses the kidneys - and I had an hour drive home! I must have stopped in every place that had a necessary! I hit the office twice before I left, the McDonalds in Glenmont, the Stewarts in Coxsackie, Cumberland Farms in Catskill and the library in Cairo as I had books to return! I was SO glad to get home!


They gave me the above  card to carry because I will be radioactive for 5 days - and told me to especially stay away from children and pregnant women. I made a quick stop in the dollar store, making sure there were no kids and then came home. All the way home all I could  think of was the song I'm Radioactive by the Firm - I know there is another song  called Radioactive by Imagine Dragons, but its The Firm I remember playing in the car all the time. Thought you younger folk might like to give it a listen - you gotta love the clothes and hair of the time!

That's it till next week when I get to have a CAT scan of my lungs - there are sure a lot of hoops to jump through for this, but better they are informed than not.
Posted by linda lemons at 4:33 PM No comments:

Well, this surely is not how I wanted to start the new year, but trouble is no respecter of persons.

Back in October I went to a pain management clinic to try to do something about chronic sciatica. I had a cruise coming up and I didn't want to deal with the pain anymore. One of the things the doctor there ordered was an MRI of my back so he could see where my pain was emanating from. I went back a week later and he mentioned that a few cysts showed up on my kidneys and I should probably go see my primary care doctor to have an ultrasound done. I almost blew it off, but  decided it would be smarter to see my doc, who ordered the ultrasound and it showed not only cysts, but that the right kidney was enlarged. She referred me to a Urologist. I have to say that I really liked him the moment I met him. He was thorough about my health background and we also talked about my family. He ordered a CT scan with dye to get a better view of what was going on. He wasn't concerned at all and said to enjoy the Christmas holiday, then get the scan and come back in the beginning of the new year.  I got my scan done Jan 2 and had an appointment for the results on Jan 4.  I don't know about how hospitals and doctors work where you live, but here all my docs are connected to one hospital which assigns you a patient portal online to keep up with your visits and results of your lab/xrays etc. I decided to look at mine the next afternoon and saw that yes I did have hydronephrosis (water) of the right kidney, but that they found cancer in the left kidney. I printed it out and took it upstairs to read to my husband, and while I didn't cry, I did notice a funny shift in my voice as I got to the part about renal cell cancer. Who expects something like that? I know I sure didn't. I don't think I've ever met someone with kidney cancer. Apparently the type I have been diagnosed with is fairly rare - of course! I have to say though, that I don't feel any deep fear, haven't cried, just feel at peace - that may change as time goes on, but for now, I am good.

The next day I went to see the doctor and he was so sweet. He saw me coming in and called me over to a computer he was looking at. He explained the hydronephrosis was caused by a stone and possibly something I was born with but that the left kidney is the one he wanted to talk to me about. I told him I had read the report and then he showed me the area. We went into his office and he told me I was the first thing he thought of in the morning thinking how am I going to tell this lovely lady that I found cancer when it wasn't even expected. I am the kind of person that just wants the facts so I can deal with them, so he drew some pictures to explain that he wasn't sure if the blockage in the right kidney was caused by the stone rolling around or something else, but at any rate, before we can concentrate on the left kidney, we have to make sure the right kidney is working well. So his plan is to operate on that one first and make sure its working properly and then do a partial removal of the left kidney. It does appear it hasn't spread into the lymph nodes which is good and he thinks it is Stage 1, which, if you are getting a cancer diagnosis is about the best it can be. You can see the dark area here that is the problem 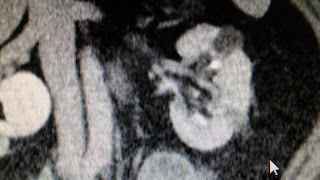 It is what he called a serendipitous finding - when you find something you weren't looking for on an xray looking for something in a different area. Most people don't get diagnosed till they are Stage IV because there are no markers for it. I had no symptoms, my lab work was perfect. There was nothing to even hint at this. I wrote a letter to my pain management doc to let him know and he called a few days later. He said he was so sorry how it turned out, he has never had anyone have this result, but now he said he will be careful to say that it is best to get it done, because of how it turned out for me...so maybe I will end up helping some people down the line.

So, that's it in a nutshell, prayers of course are welcomed and I will be keeping this updated as  things go on. I figure if someone happens upon this who is dealing with the same thing, maybe my journey can help them on theirs. God bless!
Posted by linda lemons at 8:38 PM 1 comment: