No Place on Earth 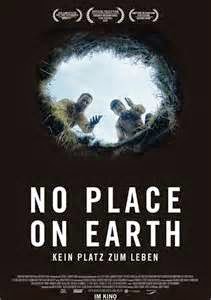 I am a big fan of documentaries, probably because I love learning new things. Every year, after the Oscars, I check to see what documentaries were up for an Oscar and order them from my library. Some are flops for me, but I would say the majority I enjoy- even if I have to deal with subtitles! This week, I receive No Place on Earth which is about a group of Jewish families that survived underground for over a year to hide from the Nazis. It is a powerful story and told well, interweaving a re-enacted story line with the survivors telling the story.

This story may never have been told if it weren't for a caving enthusiast named Cristos Nicola who went to the western Ukraine in 1993 looking to go spelunking in the caves nearby and also try to learn a bit about his heritage. He went down into the cave at Verteba and started going from "room" to "room." He wasn't too far in when he discovered some odd things - a shoe, a key, an old cup, and writing on the top of the wall. 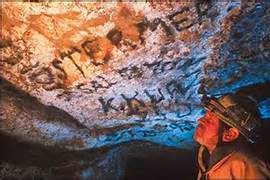 He was intrigued and after he finished searching, he went to the town nearby and asked about it. Someone told him it was probably the Jews that hid there during World War II. This sparked his interest and he spent the next ten years trying to find the people who had been in there. The Jews accounted for over one third of the townspeople and sadly almost all of them died in the Holocaust. Initially it was hard to get anyone to talk, but finally little bits of the story started coming out. He traced the family to Montreal, Canada and New York.

They told him that in 1939 they could see the writing on the wall regarding Germany and the Nazi regime and applied to emigrate to Canada and the U.S.A. Sadly, by the time the permits came through, the borders were closed and they couldn't leave. Initially they went into the Verteba Cave (which is almost 5 miles long) because it was the one they were aware of. They explored it to find a second way out and found that by clearing an area daily, there was another hole that came up in the middle of a field. There were 26 Ukrainian Jews that entered the caves which included three families. They ranged in age from 2 to 70. They brought in what they could manage and periodically left the caves to scavenge for food. They stayed in that cave for 344 days - the longest time anyone has remained underground. The Nazis found the cave and raided it while they were sleeping, but most managed to escape down into secondary caves and out the other hole. Eight were captured. Six escaped, but two were never heard from again. The six hid in a friend's barn till it was safe, and then were shown to a second cave not known to many called Priest's Grotto. They joined with the others and some new people joined the group bringing the number to 38.  The new cave was better as it had 2 lakes. One they drank from, the other was used for washing. While they were safer, there were still townspeople who tried to kill them by digging into and closing up the entrance to the cave with boulders and wood.Luckily the people managed to find their way out by digging in shifts.

I can't imagine how difficult it must have been for them and especially the children. There was little to do down there, but their families told them stories of the Torah about Moses, Esther, Joseph and other biblical heroes. One of the men made sure they still followed the Jewish calendar and followed the traditions of the special days like Sukkoth, Yom Kippur and the like. Finally, one day a local farmer dropped a bottle down the hole with a message inside that the Germans had gone and it was safe to come out. When the children were brought out into the light, they were almost blinded by the brightness of the sun. They were in the caves a total of 511 days. Most of them went to Poland, but found it still wasn't safe there and made their way to the American partition of Germany and later to North America. 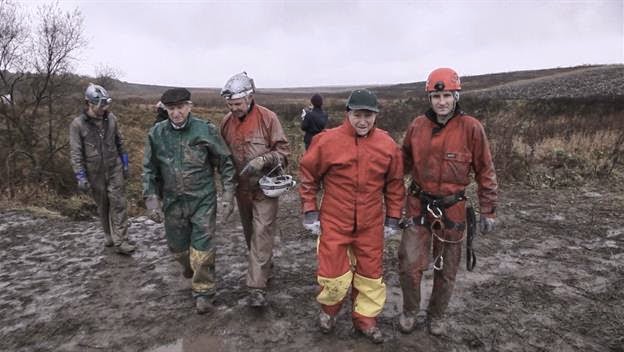 I loved listening to the survivors telling the story. It isn't often you get a first hand account like that. The oldest survivor, named Saul was 91 when the documentary was filmed. My favorite part was when they brought the survivors and some of their grandchildren back to the caves. It was such and emotional time for them, not just because they once more entered the caves, but because after years of passing the stories on to their children, they were able to go into the caves as well. They also were able to tell the men filming, that the writing on the walls included their names so they wouldn't be forgotten.

There is so much more to the story, I hope you look for the dvd at your library. It will move you and bless you!

note: photos are from the documentary
Posted by linda lemons at 7:37 PM No comments: 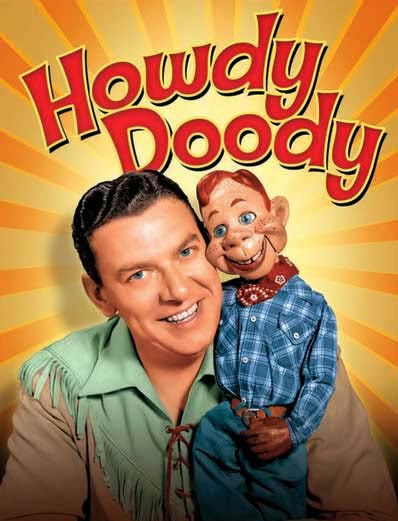 I love that this week's challenge is favorite TV shows - I have been a TV-aholic since I was 3 or 4. I know I watched Howdy Doody regularly and loved Clarabelle, but I don't think it was the first show I was entranced by. I am pretty sure that honor goes to Ding Dong School with Miss Frances. My grandmother used to tell me stories of how much I loved her - so much so, that at that young age, I was imitating the way she spoke and drew pictures upside down because that was the way Miss Frances did it - well, at least that is the way it looked to me as she did draw them that way to show children how the picture looked as it was being created. 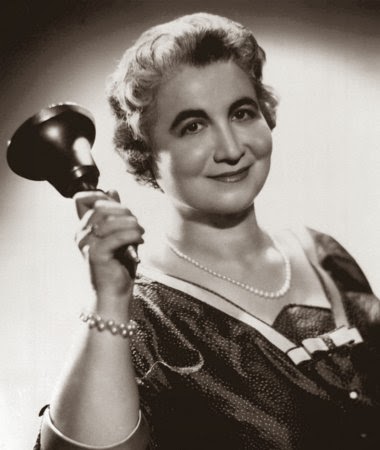 She was everybody's favorite teacher and was so personable. The show was nominated three times for an Emmy. It didn't win, but did pick up a Peabody award. The show ran from 1952-1956. One of the few surviving clips is here http://youtu.be/PuavktC6lm0

Captain Kangaroo picked up where Miss Francis left off starting in 1955 and running for 30 years! I think he was the Mr. Rogers of our generation. 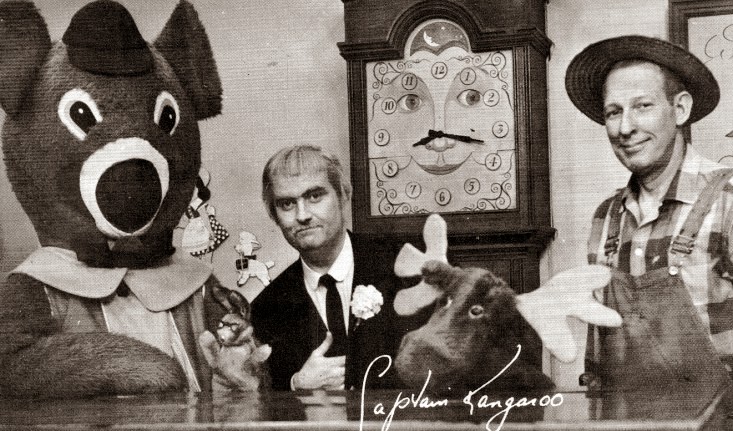 I loved him and all the characters shown here - Dancing Bear, Bunny Rabbit, Captain K., Grandfather Clock, Mr. Moose and Mr. Green Jeans. It was such a gentle show and took place inside the "treasure house". Most of the show was the Captain interacting with the regulars, but there was a cartoon in the early years called Tom Terrific. Tom had a sidekick called Manfred the Wonder Dog and a nemesis called  Crabby Appleton. You can enjoy a clip of the show here: http://youtu.be/__0nVHr4bjk

Kukla, Fran and Ollie was a puppet show that was supposedly for kids, but apparently a lot of parents watched it as well. 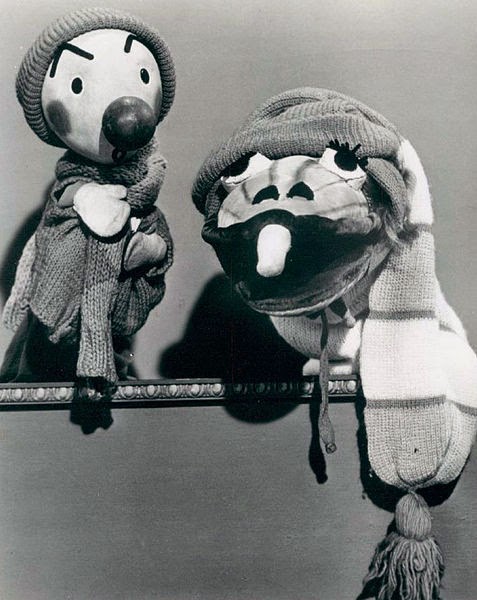 The star was Fran Allison, a comedienne and she was the only human on the show. It was entirely ad-libbed and when Ollie the dragon was upset, he would slam his head on the stage to show frustration or roll on his back to be endearing - here is an interesting clip:  http://youtu.be/kekg9g819Ks
Did any of you watch the Pinky Lee show? Pinky was a vaudeville comedian who put together a fast paced kind of crazy kids show - I loved him - it was a bit frenetic and adults thought it was dumb, but kids loved it. I found a great clip on youtube -I didn't think any of these existed! http://youtu.be/Wj2gq19hebs

Local TV shows were popular back then and my favorite was The Sandy Becker Show. I am pretty sure it was exclusive to the New York area. He had all these crazy characters that he did, the addled Big Professor, the incompetant mad scientist Dr. Gesundheit and the simple minded Norton Nork, but my favorite was Hambone who was a crazy double talking disc jockey. The only clip I could find was a rare color one, but it doesn't do him justice. He was way before his time I think.


My other childhood favorite was Soupy Sales - I think he also started out as a New York show (along with Chuck McCann's Bozo). Soupy was crazy! Most of his show was impromptu with his writers and crew egging him on. You could always hear them laughing in the background during the bizarre skits. He had a sweet lion puppet called Pookie and two strange puppets - which were only arms and hands called White Fang and Black Tooth. They did not speak, but only made strange noises. Soupy got in big trouble on January 1, 1965. He was miffed that he had to work on the holiday and told the kids to tiptoe into their still sleeping parent's rooms and remove those "funny green pieces of paper with pictures of the U.S. Presidents from their pants and pocket books (purses) put them in an envelope, and mail them to me." Several days later, repentant after receiving real money and monopoly money in the mail,  he explained he had been joking and that all the money received would be donated to charity. Parents still complained and he was suspended for two weeks.  The uproar surrounding Sales' suspension increased his popularity!

There were so many other shows I loved as a child - maybe you remember some of these - Lassie, Fury, My Friend Flicka, Little Rascals, Davey and Goliath, Mr. Magoo, Rocky and Bullwinkle, Sky King, Davey Crockett, Father Knows Best, Patty Duke Show, F-Troop, McHale's Navy, Maverick, The Rifleman and so many others. I look back at some of them and wish our world was like it was back then, when children listened to their parents, shows had a moral world view and everything wasn't about pull you pants down humor and sexual inuendo. I must be getting old!

As  I got older, my tastes changed and I was an avid fan of the original Mickey Mouse Club. I tried watching the "new" one they made which spawned Justin Timberlake, Britney Spears and Christina Aguilera, to see if it would work for my kids, but it lacked the charm and gentleness of the original show - Besides the cartoons Jimmie, the host, introduced songs and skits by the Mouseketeers. There were also wonderful series included like Spin and Marty, The Hardy Boys, and Corky and White Shadow. All taught good morals and to lean on your parents for help and advice. There were the main Mouseketeers and others that appeared in the serials like Tim Considine, Kevin Corcoran (my beloved "Moochie") , Roberta Shore and Tommy Kirk. Each day had a theme -
Monday -Fun with Music
Tuesday- Guest Star Day
Wednesday -Anything Can Happen Day
Thursday- Circus Day
Friday -Talent Round Up

I loved everything about this show - from cute little Karen and Cubbie, to Bobby Burgess dancing, to Annette and Darlene Gillespie's series - I doubt I missed a day as a child. And I think everyone my age knows the song...


Posted by linda lemons at 2:06 PM No comments: