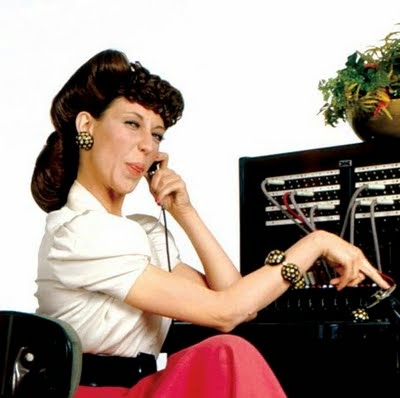 So, the challenge this week is to write about the telephone...I cannot even think of that without thinking of Lily Tomlin's sketches as  Ernestine the telephone operator.
http://www.youtube.com/watch?v=k9e3dTOJi0o&feature=share&list=RDk9e3dTOJi0o
One of my first jobs after high school was working as an operator for the hospital I worked at. I worked in the admitting office, but they needed someone to cover the phones while the gals who worked there full time took lunch or breaks, so I volunteered for the job. I really enjoyed the fast pace of putting the trunks in and out of the proper channels although I did have a few funny moments - remember we are talking a hospital and one day I was chatting about some new shoes I had bought and answered saying, "Smithtown Shoes, May I help you?" Another time it was "Smithtown Pizza".  I looked at my co-worker in horror and sputtered an apology to the caller. Something that was done and probably wasn't right - well, okay, it definitely wasn't right, if you angled the line just so, you could listen in on the conversations...yeah, we did that - usually it was one of the really good looking docs who was having an affair- we would crack up silently as we listened - I'm sure today we would be fired for it, but back then, no one really cared! I was kind of sad when the old boards were phased out, they really were a lot of fun.

My dad and grandfather both worked for the New York Telephone Company, better known as "Ma Bell". Both worked there all their lives and ended up "Pioneers" which was reserved for those who put in 30 years or more. My dad started out as a lineman and worked his way up to Project Engineer; quite a feat for someone with a high school education - but back then, many places took those who were good workers and brought them up the ranks training them as they moved up. I remember there was a time where his lack of college became an issue and if I remember correctly, he offered to take a college exam and aced it. It was never brought up again. When I was in high school, there was a huge strike and he found himself riding shotgun in Harlem doing repair work in place of those who were out on strike. He had a few interesting episodes, but managed to stay safe and even rescued an old pedal singer sewing machine for my mom in one of those basements.

I am always amazed at the differences in how things were out west of Chicago where my husband grew up and the Bronx and Long Island where I grew up. My husband remembers using phones like this 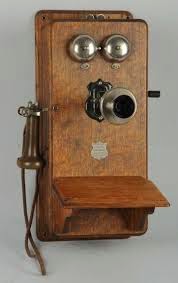 and actually speaking to an operator and asking for someone else's line. My first phone looked  like this 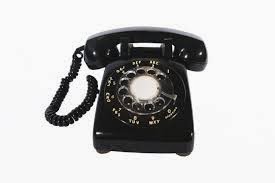 How weird is that? The funny thing is we still have one upstairs in our bedroom and it works great!  He also had a party line, we had a single line.  I do remember when the princess phone came out - that was a big deal and my dad brought one home. My sister wanted one so badly! 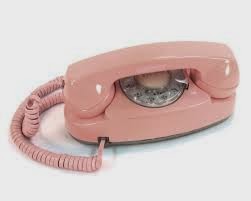 Just before the World's Fair in New York 1964. my dad showed me the neatest thing when I was visiting his office in New York City - the picture phone!! It was going to be unveiled at the fair. I couldn't believe how cool it was - imagine using the phone and being able to see who you were talking to! I remember thinking people better not answer the phone coming out of a shower!! 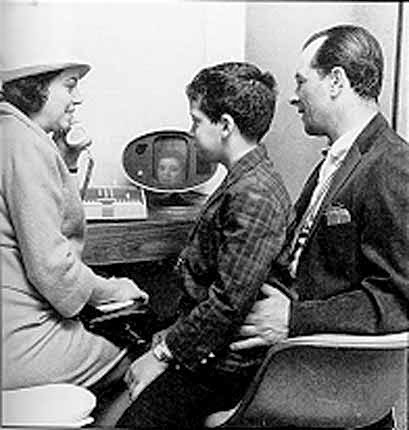 One of the perks with my dad was always getting the newest and coolest phones. Another perk he had was free phone service for all of the US - that was huge back then as you paid dearly for any long distance - and that could mean from the Bronx to Long Island! He always made sure we didn't abuse the privilege, but I do remember him working some Saturdays during my short engagement to my hubby and connecting our two lines through the office so we could chat for free. Every now and then he would come back online and ask if we were through yet. It was a real blessing.

When we emigrated to Canada in 1979, we bought a place way out in the country. The only service out there was a party line...hard to believe they still had them. Each person on the line had a certain ring - two longs, two shorts, a long and a short or a short and a long. There was a young kid on our line that we knew was always listening in - I had a good laugh when I realized he grew up to become a well known Country Western singer! When we moved back to the US, we once again lived outside of town and amazingly, that particular stretch, still had the party line. For a while we shared it with our neighbor because the rates were lower if you shared and when she changed to a single line, we were the last ones in the area still keeping the party line and rates even though we had no one to share it with.

The house we bought in 1998, where we still live, came with a wall phone in the kitchen like this. Since our home is 80 years old, we decided to keep it. It is amazing how few children have seen one of these - we loved it when our kid's friends would ask to use the phone - they would invariably come back looking confused and tell us that something was wrong with the phone because nothing pushed in - even pondering it, they never came up with the idea to turn the dial!

So here we are in the age of  Iphones and androids and now I am the confused one. It took me forever to figure out how to make spaces for a phone text, I would send my kids amessagethatlookedlikethis. They would die laughing. I still haven't purchased one, I am doing quite well with my go-phone which is cheap enough for what I need. I prefer the land line. You can hear people so much better that way, and truthfully even better if you keep one of those old fashioned dial or push button phones. I guess they are going to have to drag me kicking and screaming into the future of phones....my dad would be proud!