Genealogy: Why the Soundex Is Important

When I first started working on our genealogies in earnest, I didn't understand the importance of the Soundex. I seemed to find all I needed on Ancestry.com without having to learn it. But I kept seeing it at every archive and library I visited. Then I started working on my husband's missing family. We knew was that his father's parents basically abandoned him by the age of 5 and he was bounced from pillar to post until he was a teen. All he knew was his parent's names, Albert Lee and Mildred.
I knew his dad was born in Nashville, TN and we had his corrected birth certificate which showed even though his original certificate said Lemmons, it was really Lemons. I looked at records for Nashville but found nothing. I found a marriage certificate for Albert and Mildred in Springfield, Robertson County, but no info was recorded about their parents names. I had tried the 1920 census with no luck, but at the Tennessee archives, they had photocopied Soundex info and a microfilmed roll of families for the state of Tennessee.

The Soundex system takes the consonants of the alphabet and gives them a number from 1-6. All vowels are left out. Each Soundex code is made up of a letter and three numbers - correlating to the first three consonants in a name. Below is a chart for  you

Notice that Y is not used, it is considered a vowel for Soundex purposes. You use the first letter of the name you are searching and then the three numbers for the consonants following - for example, the name Lemons is L-552 (LMNS) This allows the system to use any vowel in between, so you would get things like lamons, lemons, limons, lomons, lymons and any letters in between the  MN and the NS. It does give a ridiculous amount of records to look at, but when you are looking for that elusive record, it starts to matter less.  If you are confused by this, here is a link to a Soundex converter where you can put in your name and it will automatically convert it: http://resources.rootsweb.ancestry.com/cgi-bin/soundexconverter

With my code in hand, I started going through the 1920 state list stopping at anything that might remotely be him. Finally in Putnam County, TN, a family emerged with a widowed mother and  five children...one of whom was named Albert L. The name looked to be spelled Lamons, but that could be a mistake, which I found it was once I was actually able to find it on  the census itself. You never know how a person sees letters and transcriptions are often misspelled. Now I had a possible county and a year of birth which fit the right time frame. But what happened to his father? Since I was already in the archives, I was able to look up his birth  certificate and found his father was a John T. Lemons and mother Mary B. Bowen. I looked in the death records and found John T's death certificate. He died in 1914 from pneumonia. 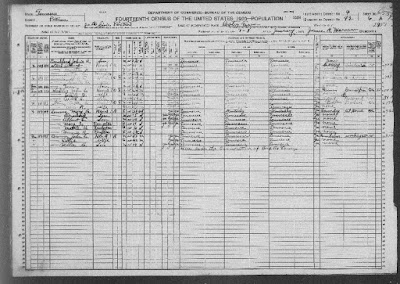 None of this could have been found at the time without that Soundex code. Since then I have used it numerous times when looking through microfilm and really, if you notice on Ancestry and Family Search, they use the Soundex when they give you your list of possibilities. Thanks to the Soundex, I was finally on the way to breaking through this brick wall. Now I could start to look in depth into this family to see if it was indeed the right Albert Lee.
Posted by linda lemons at 4:01 PM