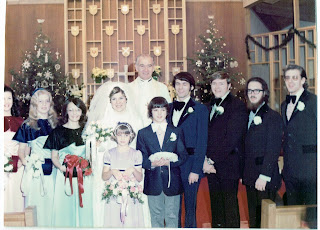 In  August of 1974, I was peacefully minding my own business, when I received a phone call from my friend Chris in Chicago.  We had becomes friends in 1967 when I was 17 and writing about Davy Jones for FLIP magazine. She was one of the may hundreds who wrote me after the first month my article appeared, and continued writing me.  As time went on, a friendship was formed and when I was on the road with Up With People the following year, her family took me in while I was recovering from exhaustion. Flash forward to 1974...Chris was getting married and wanted me to come sing at her wedding. I was broke and said I couldn't, but then she called and I couldn't say no to her, so I borrowed some money and headed for Chicago.

The night before the wedding we had a long chat about love and marriage. I was quite convinced that I was never going to meet anyone. I was doing a lot of theater at the time and all the guys I met were either gay or married!. In fact, I had this habit of falling for gay guys! The one guy I had dated who was a possibility was close to what I was looking for, but he wanted to be with me all the time, and I wanted more freedom. We would date for 6 months or so before I got bored and would break things off. Several months would go by and I would miss him and we would start dating again. This went on for 2 or 3 years. He really was a nice guy. My parents really liked him and I really thought he could be the one. The only problem I could see was that he didn't fit in very well with my theater friends - didn't dress the right way, I thought. So, when we would go out, I would tell him what to wear (boy, was I young and stupid!). I guess the straw that broke the camel's back had finally come for him and in June of  '74, when I once again told him what to wear to a cast party; he never showed up. I knew I had crossed the line and that it was over. I felt bad, but wasn't broken up over it. That's when I realized he wasn't the one. I dated a few guys over the summer, but no one was close to what I was looking for.

I flew in for Chris and Tom's wedding and she and I chatted late into the night about finding the right guy. She said she knew the minute she met Tom that he was the one, that it's just something you know in your heart. I was skeptical about that, but happy for her. She mentioned she had a friend she wanted me to meet, but I told her I didn't do blind dates - too many bad experiences!

The wedding day was beautiful. I sang "Sunrise, Sunset" from Fiddler on the Roof and Chris was a beautiful bride. After the service, she pointed out her friend, and thinking he was nice looking, I went over to introduce myself to him. I said hi and he basically blew me off! He said later, he thought I was too beautiful for him and either too young or too old. When I got to the reception, I had no idea where to sit. Unlike most weddings I had been to, there was no card for a table to sit at. I went over to Tom to ask what to do,and he asked, have you met Cork? I said, I did, but I don't think he liked me. He said, "You just need to be introduced" and called him over. He introduced us and said, "You both work in hospitals, why don't you sit together." Cork looked at me and asked did I want a drink. I said a screwdriver and he said, "I'll get one for you STAT" That cracked me up and the ice was broken. I remember asking him what his sign was and when he said "Aries", I thought, this just might work - Sagittarius and Aries were supposed to work well, I thought. We enjoyed a nice dinner and decided to dance. It was while we were dancing that it happened. I felt like I was Maria and he was Tony in West Side Story! Everyone disappeared and it was just us two. He says he was "dancing in tongues" because he was dancing so well, when in reality, he can't dance at all! We decided to go outside for some air and took a walk. We started singing songs from Brigadoon, which was his favorite show. We walked back towards the venue and were in the parking lot, when he said to me "You're really tall" I said, "No, its just my platforms", and took off one shoe to show him how tall I was. He laughed and took off one of his shoes to show me his height and then leaned down to kiss me. We went back inside, and they were cleaning up - we had missed most of the reception! 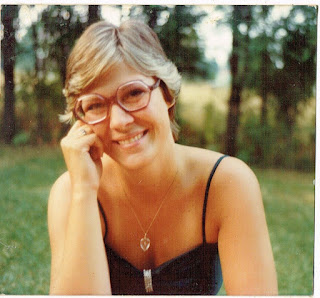 I had no way to get back to Chris's house, so he offered to take me first to the after party at Tom's parents and then back to Chris's house. On the way there, we stopped at his favorite truck stop for a cup of coffee - here I was in a beautiful evening gown and he in a suit - I thought it was the funniest thing! I had never been to a truck stop before. Then he continued to show me his town and brought me home to meet his parents. I thought to myself, Oh my gosh, I think he wants to marry me! After we left his parents, his mom said to his dad, "He's going to marry that girl!". We went to Tom's and people started asking us how long we had been in love - it was that plain to all who saw us! When he took me back into Chicago, we sat for a while in his car and he told me he loved me. I said I loved him to, but how could we have a relationship when I lived in NY and he in IL. We took a walk around the block, and stopped in front of a tailor shop - and that's when he asked me to marry him...and I said yes. Later that evening, Chris called from her honeymoon to ask when we were getting married! I asked her how did she know and she said she and Tom could see it right off!

I flew home the next day. I went back to Chicago a month later and received my engagement ring. He came twice to Long Island to meet my parents and spend a few days with me. We never actually dated! Then 3 months after we met, on this day, we married. 42 years - quite amazing really. Do I believe in love at first sight, yes, I do!!!!!  Do I know how to plan a wedding quickly and on the cheap? Yes I do!