I'm over my fear of venison! 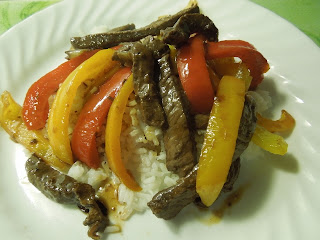 Its the end of 31 days of recipes...so I will leave you with this. Happy New Year!
For years I was afraid of venison - I always found it had a gamey taste and would bravely try it in different ways - pepperoni, jerky, roasts - they were all awful! But with things being tight these past few years, when a family friend offered us some venison to try (he likes to hunt, but his wife hates venison!), I said sure. That first delivery sat in the freezer for quite a while as I tried to get up the courage to cook it! Truthfully, for the first year of making venison, I always hesitated before trying it, even though I knew it was good - and I wouldn't try the leftovers either - that's how queasy I was.  I looked online for recipes and all I saw were recipes that were tomato based. hubby likes fresh tomatoes fine, but cooked tomatoes make his lips burn, so unless its chili, he avoids them. Even when I make spaghetti I usually have to make a plate of plain so he can butter it and I keep some sausages aside as well. I did notice, however, that a common thread in the recipes was the use of vinegar in the marinade. I thought about that for a while and decided to try marinating the steaks in balsamic vinaigrette. Why? I haven't a clue!!!! I just like balsamic vinaigrette and wondered if it would work - it did!! The venison didn't taste gamey at all! So I came up with my first recipe for venison-

1. Marinate steaks in Balsamic vinaigrette for several hours - making sure to turn it at least once. I marinate it all day - the longer the better. It caneven be frozen when you add the marinade. They are so small, they thaw quickly. 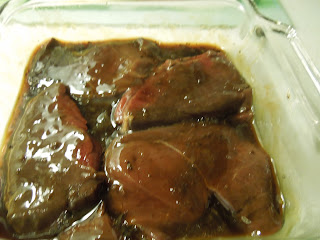 2. Put the olive oil in a deep frying pan and start to heat the pan
3. Cut all the peppers lengthwise and cut up the onion into slices as well. 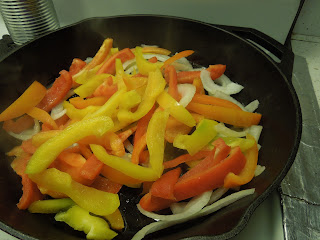 Add them to the pan and stir fry until the onions and peppers are soft. Remove from pan and put int a large bowl
4. While the vegetables are frying, rinse the marinade off the steaks and slice them length wise. 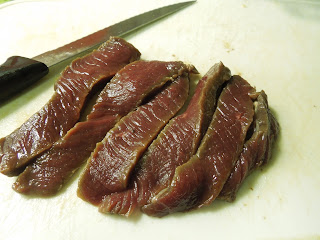 5. After vegetables have been removed from pan, add venison and stir fry quickly - venison has no fat and can get tough if overcooked. When they turn pink, add 1/3 cup balsamic vinaigrette and cook a minute or two longer. 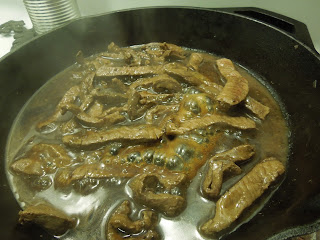 Remove steaks and marinade from pan and add to the pepper mix.
6. Serve over rice

So there you have it - non gamey venison. I asked our friend Vern who is an amazing hunter and regularly eats venison what he thought of my idea - he laughed and went to his pantry and pulled out....wait for it.....balsamic vinaigrette!!! He gave me some other ideas for cooking it and I have made another recipe that works really well - I take a roast and put it in my crockpot with a ton of barbecue sauce. I cook it all day and then take it out and rinse it and the crockpot. Then I pull it apart with forks to make a pulled venison, put it back into the crockpot , add a little more barbecue sauce, cook it another hour and serve it on buns - the kids never even noticed it was venison - score!!
Our friend who now gives us about 1/3 of the deer he gets every year, found that if he added bacon to the hamburger mix, it made amazing burgers - he gave us some and he was right! Reported it to our friend Vern and yep, he does that too! The big thing with the burgers is they fall apart easily because there is no fat, so we use our George Foreman grill - cooking both sides at once works great and only take a few minutes. My son now hunts and made an amazing jerky - now I need to get his recipe before next year!!!


Moral of the story - If a friend offers you some venison, put aside your fears and give it a whirl - you may be very pleasantly surprised.
Posted by linda lemons at 1:31 PM