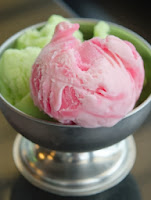 Addictions - Do you have any? I surely do - the two biggies being ice cream (which my husband calls heroin) and chocolate. I suspect I am not alone in this. When I was a kid and we had ice cream for dessert, we usually got more than 2 scoops - we were BIG into ice cream in my family. I remember when I got married and served ice cream for dessert shortly after my hubby and I settled into our house, he was horrified! He said, "What is THAT?" I said, "Dessert!" "Are you crazy?, he said, That's enough for several people! I have never had more than one scoop, its a taste, not an overload." Truthfully, I thought he was nuts, but took his back and put the bulk of it back into the freezer. Mine, however did not get put back. As an aside, I find it interesting that all my kids married big ice cream eaters. At any rate, all through our marriage I
have eaten a lot of ice cream - sometimes in mass quantity. Why oh why does Ben and Jerry's always seem to find something I cannot resist? I thought when they did away with Everything but the Kitchen...Twisted, which was my all time fave, I would be better able to resist their displays. But I found NY Super Fudge Chunk and Coffee Heath Bar Crunch were quite tasty on their own...

Do you try to hide your ice cream? You know, put it in the back of the freezer and cover it up so no one can find it. Or maybe you eat more than you expected to and you put the rest in a colored Tupperware container so your husband, partner, kid doesn't know you bought and already ate half of it. You have to find a way to hide the container in the garbage, which may or may not have you sticking it deep into the garbage underneath some messy stuff so it won't shift or show when it gets taken out - Or... you immediately put it in a bag and surreptitiously get it into the big garbage can outside. Perhaps you have actually washed it out and hidden it in a drawer or someplace it won't be seen till you can dispose of it. Or, you feed your addiction when you are out shopping by buying a pint and eating in a car (which requires you to have a spoon hidden in your purse). I have done these things and I am ashamed.

Addictions seem to run in my family. There has been alcoholism and drug addictions, so I am well aware of the danger involved. I watched my grandfather battle it several times and he finally won it his mid fifties. My uncle was a drug and alcohol addict and sadly he lost his battle and died at 40. My father in law also suffered from alcoholism and had a period of recovery before he died. I never equated myself with these addictions. Never had much of a taste for alcohol or drugs, so I never considered that I had an addictive personality as well. But I do. So, now the question is how do I overcome these addictions. I have tried several programs over the years - Weight Watchers, Atkins, South Beach - all were great the first month or so, then I fell "off the wagon". I do this really strange thing - if I keep to myself the amount I have lost, I do well. The minute I say, I lost x amount of pounds, I go crazy and sabotage myself - I have no idea why.
So, this year I think I really need to make this more of a priority and spend the time I need to make up a menu plan and stick to it. I have had some Overeater's Anonymous literature hanging around for 20+ years, back when I went to 3 of the meetings and went into a tailspin of eating everything I could because I might not get to eat it again. I never actually read the little books I had, but for some reason,  didn't get rid of them. The past few days I have been working my way through them. Last night I read this from Step 2, You are not alone
...Most of us will readily admit to using poor judgement with regard to food and eating. We may already be convinced that the way we eat is quite irrational, if not completely crazy. Closet eating, binge eating, spending more than we can afford for food, endangering our health by overeating - these are all indications that our behavior, when it comes to food, is not very sane. Since being sane means being healthy; practicing unhealthy eating habits is certainly not a sane thing to do.Realizing the insanity in other areas of our life may take a bit more time, but we eventually begin to see how interrelated it all is. The constant preoccupation with food and eating, the guilt and remorse after a binge, the fear of suffering because of one's inadequacies - these are all part of the insanity. So are withdrawal from those around us and feelings of depression. We get so used to the cycle of overeating, feeling bad, eating more to feel better, and feeling worse that we come to accept it as normal.

Wow! How true! I never thought of it as being irrational, but certainly it is. A rational person doesn't eat until she feels crummy, she knows when to stop. The idea that there was more than just food to deal with was another shocker. When I started thinking about it, I have lots of irrational behaviors. It goes on to say...
...Another element of the insanity of compulsive overeating is fantasy . What do you think about when you are eating? Chances are your thoughts are not very firmly anchored in the real world....When we eat to escape reality, we often accompany the eating with fantasies of wish fulfillment. For a little while we pretend everything is lovely; dreams come true, until the pain of overeating brings us face to face with the here and now, and we have to go out to the store for more food, since "we ate the whole thing", and there is nothing left for anyone else.

OUCH! I have a vivid fantasy world! I never connected it to eating or being mildly insane, but wow, this was killer for me. This pamphlet is really digging into some tough realities for me. I see how much work I have to do and its scary. I always thought I could manage "just a little" ice cream here and a little chocolate there, not considering that like the alcoholic, I may very well have to give these foods up forever. FOREVER!!!  I can't even comprehend this, but I guess this is how anyone with an addiction must feel - the scope of it is mind boggling.
So, I have a lot of work and a lot of praying to do. Like anyone with an addiction, it has finally hit me that I cannot do this alone. I need help - and maybe need to join O. A. I checked their website OvereatersAnonymous.org and the closest meeting is at least a half hour away, in the evening and on my faovorite TV night - or on a Saturday at 8am. These are not the hours I want - see, its all about me - The first thing I guess I have to do is understand its not all about me, or my selfishness, but about taking that first step toward getting help.

OA may not be your thing, but maybe Weight Watchers is...or some other plan. I ordered an OA app on amazon.com - it was free, called My OA Toolkit and a booklet. There are othe weightloss web sites - sparkpeople.com, foodaddictsanonymous.org, therecovergroup.org, kaysheppard.com. I don't know a lot about all of these sites, but maybe there is a starting place for you at one of them.
Let's hope that next time I will be tackling some of these issues and you will too!