An Athlete, Olympian and True Hero

The Life and Times of Charlotte Rickert Stengel 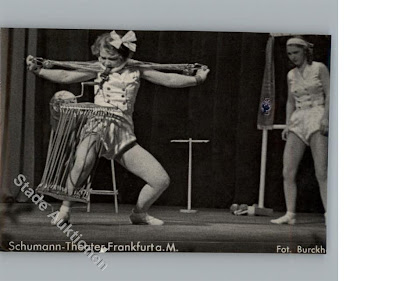 This past Sunday night a true hero died. There was no fanfare, no television coverage of her death, no stories in People or Wall Street Journal...and that is a shame. With all the brouhaha  over Lance Armstrong - his victories, his battle with cancer, the did he or didn't he take performance enhancing drugs, and the final confessions on Oprah, we gave a lot of time to someone who was never a hero. It seems to be the story of our times. Athletes rise, athletes lie or do stupids things, athletes fall; so few really become any kind of role models. I can think of a few - Kristi Yamaguchi, Scott Hamilton, Tim Tebow...there are still some around, but I really want to share with you the story of Charlotte Rickert.

Charlotte was born in Germany October 31, 1919 to a circus family. Her father Richard was a known weightlifter, her mother was Elisabeth Nufer. From the time she was an infant, her father prepared her to be a performer, balancing her on his hands as soon as she could stand. He was a weightlifter of rank,and systematically trained her from childhood - especially with expanders

"Ladies and gentlemen, girls and boys, and kids of all ages ... may I direct your attention to the center ring and the death-defying feats of Miss Charlotte Rickert, the youngest acrobat on earth!" shouted the circus ringmaster.It was 1921, and the German-born Charlotte was only 2 1/ 2 years old." (footnote 1)

The family became quite famous and performed before royalty. Richard started training Charlotte as a gymnast and also had her work with weights.


As the years passed, she became an expert performer, not only tumbling and somersaulting far above the ring, but also juggling, dancing and singing for cheering crowds.When she was 14, Charlotte was billed as "The World's Strongest Girl," and she and her family entertained Europe's nobility and heads-of-states. She also made two movie appearances in 1939.(footnote 1)

In 1935, Charlotte played the Wintergarden in Berlin with a troupe of performers.The revue featured an array of young performers ranging from singers, dancers, and musicians, to acrobats and circus performers, all of them children. Charlotte, at fifteen, was billed as the world's strongest woman, and performed feats of strength, highlighted by her challenging the strongest men that could be found in the audience to pull a high-tension spring-expander. At sixteen, she already managed an expander with 300 kg clamping force. Unlike many 'of her predecessors, Charlotte was virtually a "petite Personnel," which won with teen-fresh charm the sympathy of the audience. Charlotte comes in a bout 5' tall. Shortly after,  she pulled an 800 pound tram spring and took on five men at once to prove her extraordinary strength in a career that conquered all important stages between 1935 and 1946. (footnote 2)

In 1936, Charlotte went to the Olympics to compete in weightlifting. There was no category for women at that time, and she actually lifted more than the men. She was awarded a gold medal.

The war started soon after and Charlotte was pressed into service, entertaining the troops on the Russian front. During the war, her mother was wounded and Charlotte carried her mother through the woods for four days until they reached safety, eventually ending up in Poland. The Rickert's fame, success and wealth ended abruptly with the onset of Nazism and World War II and, when the war took a turn for the worse for Germany, the family became separated. Newspapers even told the world that they had died. Charlotte told me her family lost everything during the war, even to the point of her having no shoes. Someone saw that and gave her some shoes, and she made a promise to herself that day, that if she ever saw someone in need, she would help them. The family was eventually reunited and later, in Wiesbaden, Germany, after the American forces arrived, "The Charlotte Rickert Show" performed before the Allied High Command and the troops. This is where Charlotte met her husband, American Special Services' officer George Stengel, who was a promoter, and after marrying, in 1947 they came to America. Nineteen months later, their son George arrived.

Charlotte was enjoying her new family life when her siblings begged her to rejoin them so the show could become established in America. She finally agreed and performed again for a year in 1950. While performing one day in Pennsylvania, she heard shouts and went running to find a blaze coming from her trailer. She dashed inside and quickly passed her 19 month old son out to waiting arms. Confused by the smoke, she couldn't find the trailer's door. Receiving burns over 75 per cent of her body, she hovered near death for weeks. Although she hadn't been especially religious before, she now looked to her faith during her long and painful recovery.

After all this, money was tight and Charlotte was not afraid of work. She worked as a chambermaid and did other menial labor to help put food on the table. She had not forgotten her promise to help those in need, and soon the Stengel's house was filled with both strangers and neighbors who needed a place to sleep or a good meal. Her husband and family accepted her passion for helping others. She started a food pantry in her home and that led her into finding furniture and clothing for the needy as well. Many times, she found jobs for people. As time went on, her food pantry outgrew her home and she turned to her church to see about starting one there. It wasn't long before she had things up and running at Resurrection Lutheran Church in Cairo, NY, working five days a week recruiting volunteers, collecting donations, feeding the hungry and working with other programs to distribute cheese, honey, cornmeal and other staples to these families. She spent many hours on the road delivering furniture and often logged in 17,000 miles of back roads driving a year.

At one point, she was in a terrible car accident which resulted in a broken disc in her back. Even that hardly deterred her as she quickly jumped back into action even though she was still undergoing physical therapy. She wasn't a young woman at the time - she was 73! I remember she could move full bookcases that even our young pastor couldn't move! Charlotte worked with the storehouse until she could no longer physically manage and at 90, she finally slowed down. The storehouse feeds well over 3,000 people a year. Charlotte gave over 60 years of her life in service to other people.

Charlotte has won all kinds of awards for her work - In 2008, she won the Tyson Foods Hunger All-Star of the Month Award.  “Charlotte’s dedication to fighting hunger is inspiring,” said Ed Nicholson, director of community relations for Tyson Foods. “If each local community had volunteers who gave a fraction of what Charlotte has for our nation’s hungry, I believe we could win in the fight against hunger in this country."

I stayed with her one Sunday so her caregiver could go to church and found it to be one of the most interesting days of my life. I was able to see her photos from her circus days, her gold medal and talk to her about her achievements. While the Olympics was a very special time for her, she was more interested in talking about the poor. However, as frail as she was, she said to me, "Would you like to see what I can still do?" I said, "Of course!" and she took her leg and pulled it straight over her head!

Charlotte spent the last 2 years of her life in a nursing home, but there are very few people in this town who haven't been touched by her humbleness and her driving force in helping the needy. As I said, this lady is a true hero and role model! Spread the word! We need more people with her heart. 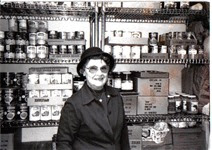