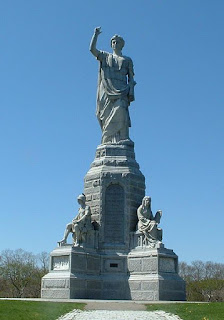 Last night my husband and I watched the movie Monumental. I am a bit of a history buff, so I was looking forward to it. My husband's ancestor Abraham Pierce came here on the ship Ann in 1623, the third ship to come with Pilgrims/Puritans/Separatists to Massachusetts. As a mom who homeschooled her children, we had spent quite a bit of time studying the Pilgrims. If you ask my son what he remembers, he will inevitably talk about Squanto the Indian and how he came to a Pilgrim's house and asked for beer - that always cracked him up. We always hoped to go to Plimouth Plantation and Boston to trace our family roots, but somehow this never happened - probably because money was always tight and to my knowledge our only family vacation was to D.C. one year.

The film follows the Pilgrims from their start in England, why they split from the church, their attempt to go to Holland to escape the king, their capture, release and second journey to Holland. There were a lot of interesting facts. I knew they had tried once to escape imprisonment by King James and that the boat captain they had hired ratted them out. I did not know about the second attempt where they sent their wives and children on a raft down a river so they wouldn't get caught while the men went to the boat. The ladies got stuck on a sand bar and were captured. The men's boat got caught in a storm as they went to get the ladies, and were tossed at sea for 2 weeks. Apparently 100 other ships were caught in the same storm which pulled them up toward Norway, and they were the only ship to survive. They went on to Leyden, Holland and their wives after being released got there a year later. I won't tell you all that was on the DVD - I could never remember it all and I really would encourage you to watch it as the extras are amazing. At any rate, after a false start, the Mayflower finally set sail for America. Their main goal was to start a settlement and spread the Gospel. Of the 102 passengers, 47 died that first winter - mostly women. I can't imagine the heartbreak and hardship they endured. It speaks of their relationship with the Indians and there is a nice interview with a Harvard professor about the roots of Harvard.

They bring you to the Plymouth Monument - the largest free standing granite monument in the USA, now tucked in the cul de sac of a neighborhood in Plymouth overlooking the ocean
http://ctmonuments.net/2010/08/national-monument-to-the-forefathers-plymouth-mass/

The film then tells more stories about colonial America and the signers of the Declaration of Independence. It puts to rest the idea that the signers were deists and not Christian, showing many original manuscripts in the collection of Historian David Barton. They speak with a niece of Dr. Martin Luther King, a congressman and other scholars.

In short, if you are at all interested in American History and the true story, I would recommend this film. It does come from a Christian perspective, but gives solid evidence for each part of the journey. It may surprise you! It is available on Amazon.com, possibly from your interlibrary loan and from the producers https://www.monumentalmoviedvd.com/?mid=2990261
Posted by linda lemons at 1:05 PM