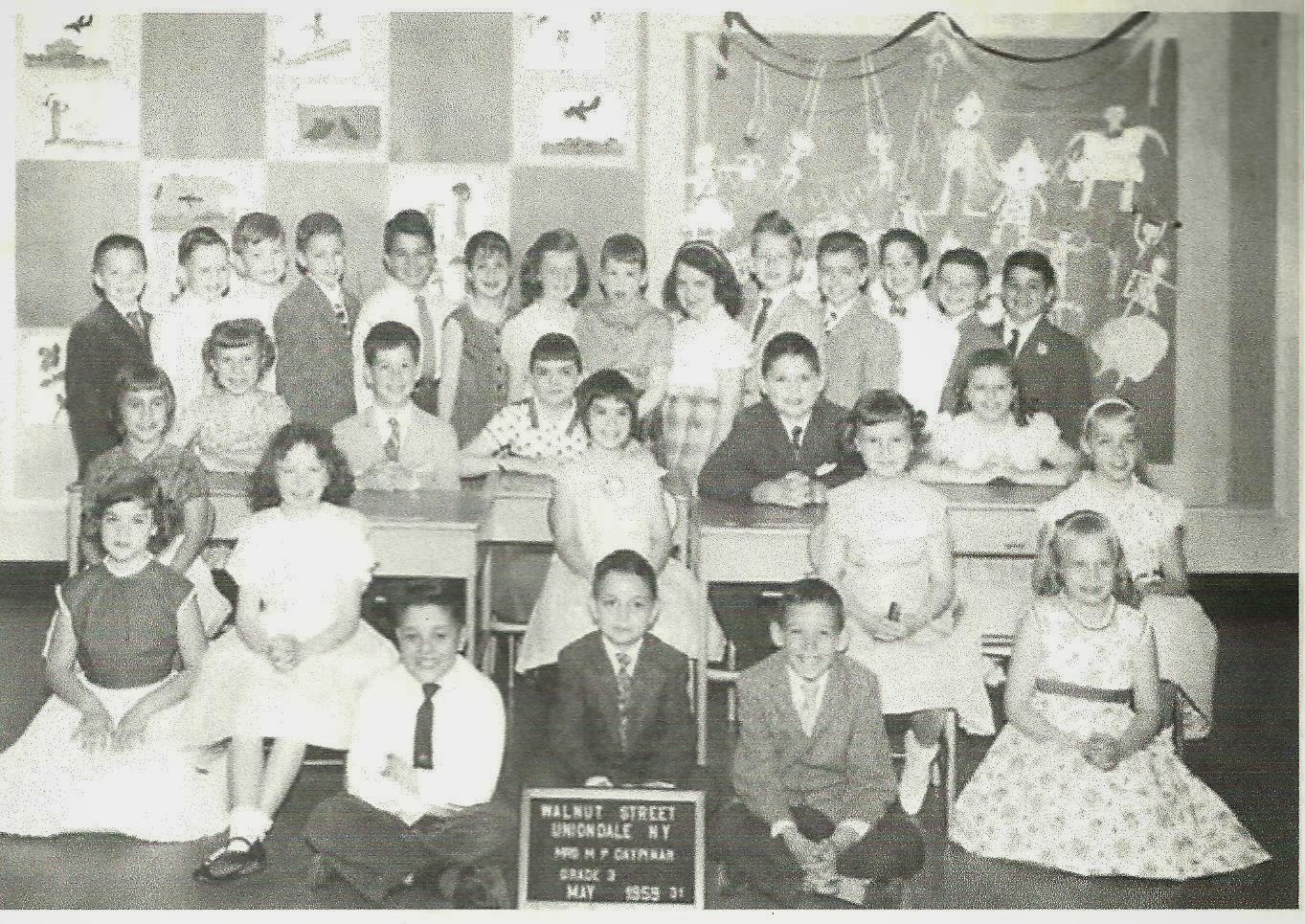 I have been following Lorine Massey's blog Olive Tree Genealogy (http://olivetreegenealogy.blogspot.ca/p/sharing-memories.html) for a year now and always mean to participate in her yearly idea plan. I have missed January and most of February, but this year I would like to try to stay consistent in blogging. Each week she gives bloggers a jump off point to write about ensuring that at the end of the year, they have 52 stories about their grandparents, parents and themselves to pass down to their families.
This weeks challenge is "Do you remember grades 3 and 4?" Who was your best friend? Do you have any report cards from those grades? Who was your best friend? Who was your teacher? What was your classroom like? How big was your school and how far from home? Did you walk or take a bus to school?


Well, I really have to put my thinking cap on for this one - after all it was back in 1958-9! We had moved the winter before from the Bronx, NY to Uniondale, which is in Nassau County on Long Island. This was a big move for me. I had been living with my grandparents in their duplex, in a neighborhood filled with duplex buildings, with my mom, dad and baby sister sleeping in the second floor apartment with my grandparents, my great grandfather in the ground floor apartment and my grand aunt living in the basement apartment - I slept with Aunt Mae in the basement. Now we were living in a neighborhood of single family homes with lots of kids and a public school. For first and part of second grade I had attended Lutheran schools, so public school was still pretty new for me. I had been in combined classes of 60+ students and now was in a classroom of about 25. The Lutheran schools were in the city and had no grassy playgrounds, just pavement, and I don't recall any swings or slides. We played typical city games outside - Mother May I, Red Light Green Light, Jump-rope etc. and occasionally went to a nearby park for recess. My new school had a huge playground with swings, slides, monkey bars and even a baseball diamond where we played kickball. It was like heaven!

I had to take two buses on the regular bus lines to get to school in the Bronx. My  uncle and aunt who were only 5 and 7 years older than me were also at the same school, so they were in charge of me on the 5 block walk to the bus and the bus ride. Living in Uniondale, I was allowed to walk to school by myself. We were just under 3/4 of a mile away, so there was no bus service for us. I enjoyed the walk there and back as there were always friends to pal around with. The school was called Walnut Street School and we used to say it was where all the little nuts go! 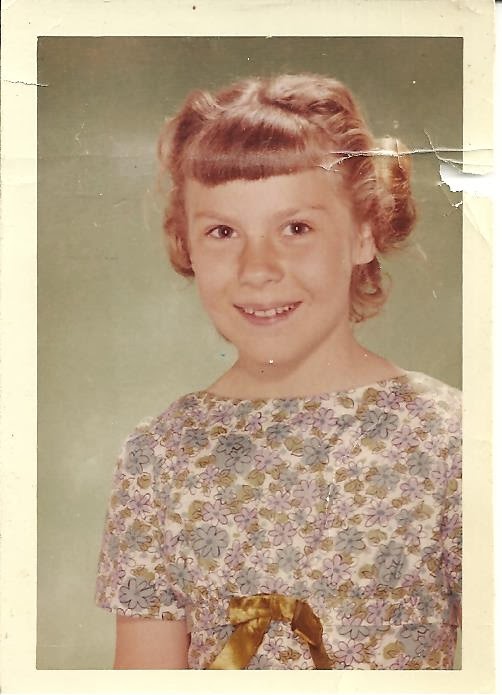 My third grade teacher was Miss Caypinar. I believe her background was Turkish. Our neighborhood was a melting pot with people whose families came from all over the globe. I remember she was short with jet black hair. Third grade was where you earned the right to use a pen. If your penmanship had reached a certain standard, then you received the long awaited permission - it was a big deal! I remember wanting so badly to get a Parker or Papermate pen - and dreamed of getting one that was scented. We didn't have Bic pens back then - the other hoped for pen was a one that held a cartridge of liquid ink and wrote like an old fashioned dip in the inkwell style pen. We still had holes for ink on our desktops. You had to be almost impeccable in your use of those because they smeared so easily, but I couldn't wait to try. I had a nice group of friends, most of whom lived within 2 or 3 blocks from me. We enjoyed playing outside after school with all the other neighborhood kids; back then we hung out with kids both older and younger than we were. There was always a game of kickball or spud going on in the street. I enjoyed roller skating and loved getting to put my metal skates over my shoes and using the key to tighten them. When a neighbor had their driveway resurfaced, you could guarantee all the skaters would be there the next day to enjoy the smooth ride! We also made our own Chinese jump ropes out of saved rubber bands, played jump rope with old pieces of clothes line and my dad built me a buckboard out of carriage wheels and scraps of wood. In winter we were all outside making igloos and slides like this one. I am inside the igloo with my neighbors Steve McGowan and Laura Thalhammer outside.That's my house in the background. 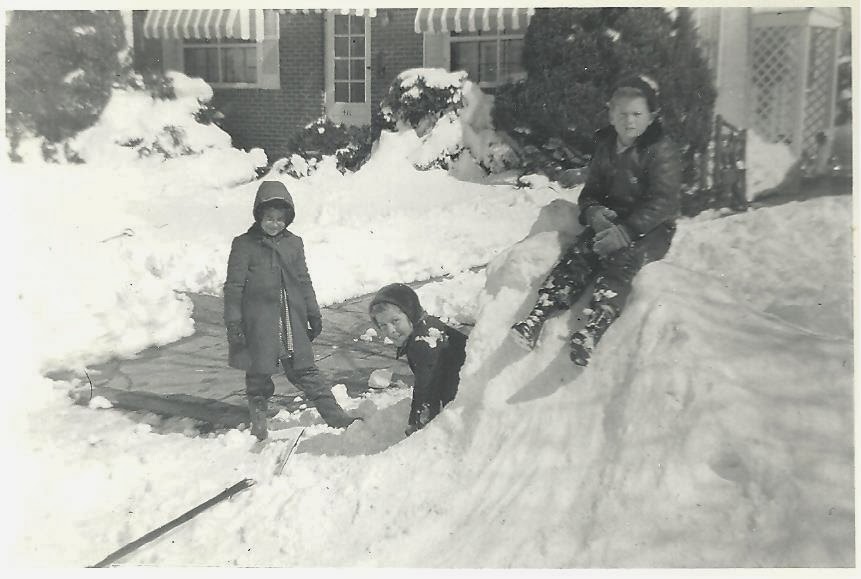 My best friend was Janet Engle. She and I shared a love of Ginny dolls and Anne of Green Gables. Actually, it was her mom who first told me about Anne. She was from Canada where I think every young girl read it, but in the US it wasn't popular at the time and I borrowed the books from Janet. I made my mom get wigs for two of my Ginny dolls, so they could be Anne with long braids and Anne with short hair after the bungled dye job! Janet and I were always in constant competition to see who was the best singer. We would stage shows and sing songs like Casey Would Waltz with the Strawberry Blond and songs from South Pacific. The big problem was that usually the judge was her younger sister, so you can imagine how that turned out!

Miss Sill was my fourth grade teacher and she was a world traveler. We were deep into the "Cold War" at that time and spent many a day practicing how to avoid being killed by a bomb. "Duck and cover" was our motto, though I have yet to understand how that was going to save us! 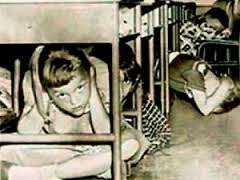 Miss Sill felt that learning Russian might be good for us - another thing I am not sure I understand! Did she think Russia was going to invade the U.S. and take it over?  I still remember a smattering of the words and phrases she taught, along with the travelogue of her photos from Russia. Hmm....maybe she was a sympathizer! 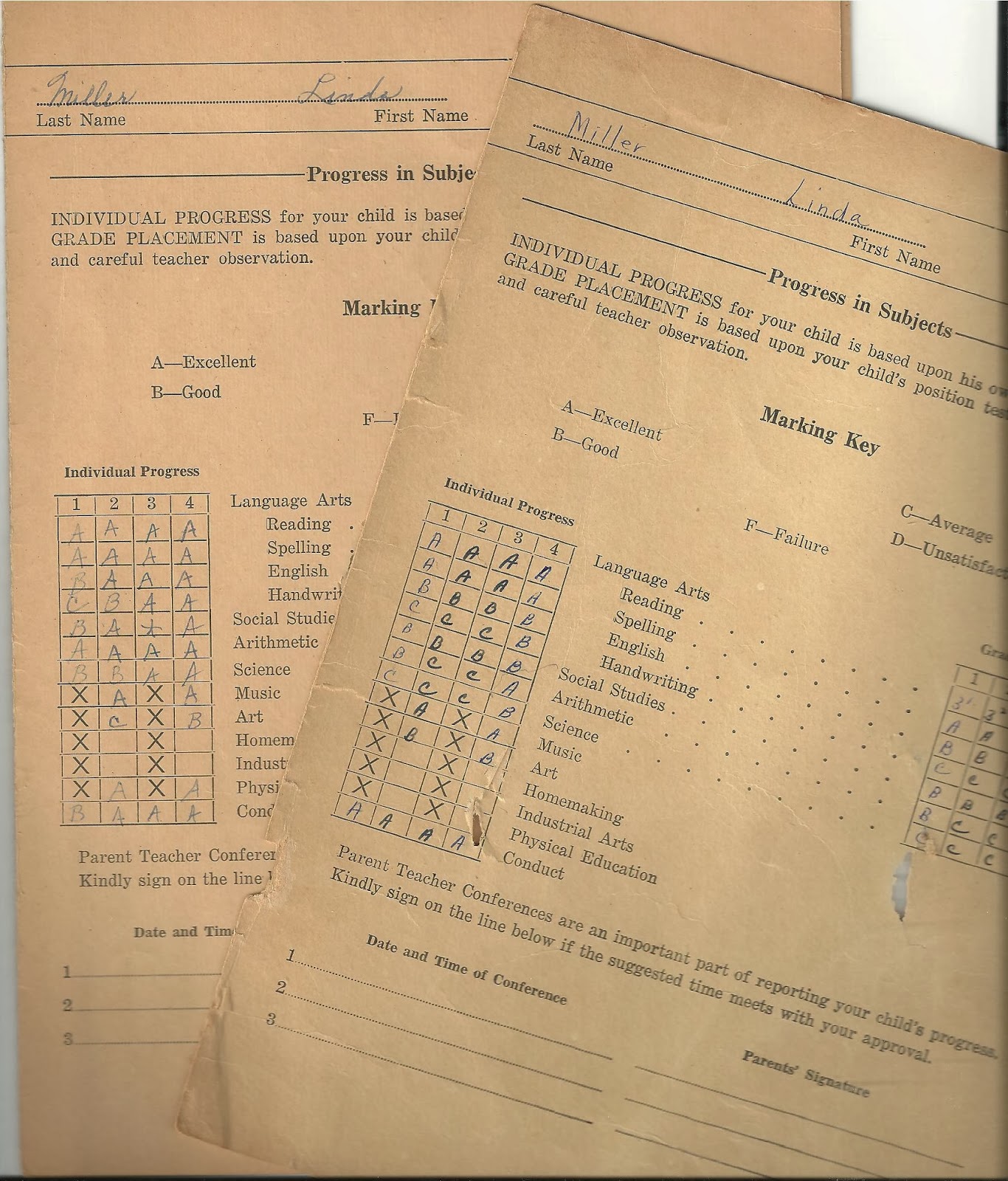 I really enjoyed fourth grade, I was always one to want to learn more - and the difficulties of math hadn't reared its ugly head. It's funny the things you do remember. I remember our gym teacher showing us how to fall off a ladder or high place without hurting ourselves. Everyone got a turn to "fall off" the ladder, tuck in and roll. We also were separated into classes for the boys (Shop) and the girls (Home Ec). Schools today don't teach this till middle school and only for a year whereas we were taught from grades 3-8. We girls learned to knit by making squares to be sewn into lap afghans for the World War II vets, how to sew ditty bags for our gym clothes, and make tasty (not) things like Welsh Rarebit. The boys started with the usual ashtrays and worked their way up to salad bowls and such. Janet Engel continued to be my best friend and we enjoyed many days of playing dolls, house, and those darn talent shows!

I went back to Uniondale six years ago, I hadn't been there since we moved out to Hauppauge in Suffolk County, NY in 1962. The houses all looked the same, but they had one huge difference - many had iron bars on the windows. I continued on to the elementary school and high school and was shocked to see a large iron gate around them and policemen checking each kid as they entered the area. It made me so sad. I guess my parents had seen the writing on the wall and its why they chose to move further out on the island. I was happy that it at least looked nice and clean like it did when I was a child. I have many fond memories of my four years in Uniondale and it was fun taking the time to think of them!