As I mentioned in last weeks post, I am attempting to do 52 weeks of sharing memories. This week we are into grades 5 and 6.
I am looking at my report cards for both grades and see that I had aa problem in the last quarter of grade 5 with English - which I can't even imagine as it has always been my favorite subject - ask my kids - I love grammar and spelling and reading most anything I can get my hands on. They went through countless drills of diagramming sentences and reading the classics when I homeschooled them. All my habits were commendable and I was a good student. I do notice that Math was starting to rear its ugly head and my lack of interest in all things Science was also starting to show. 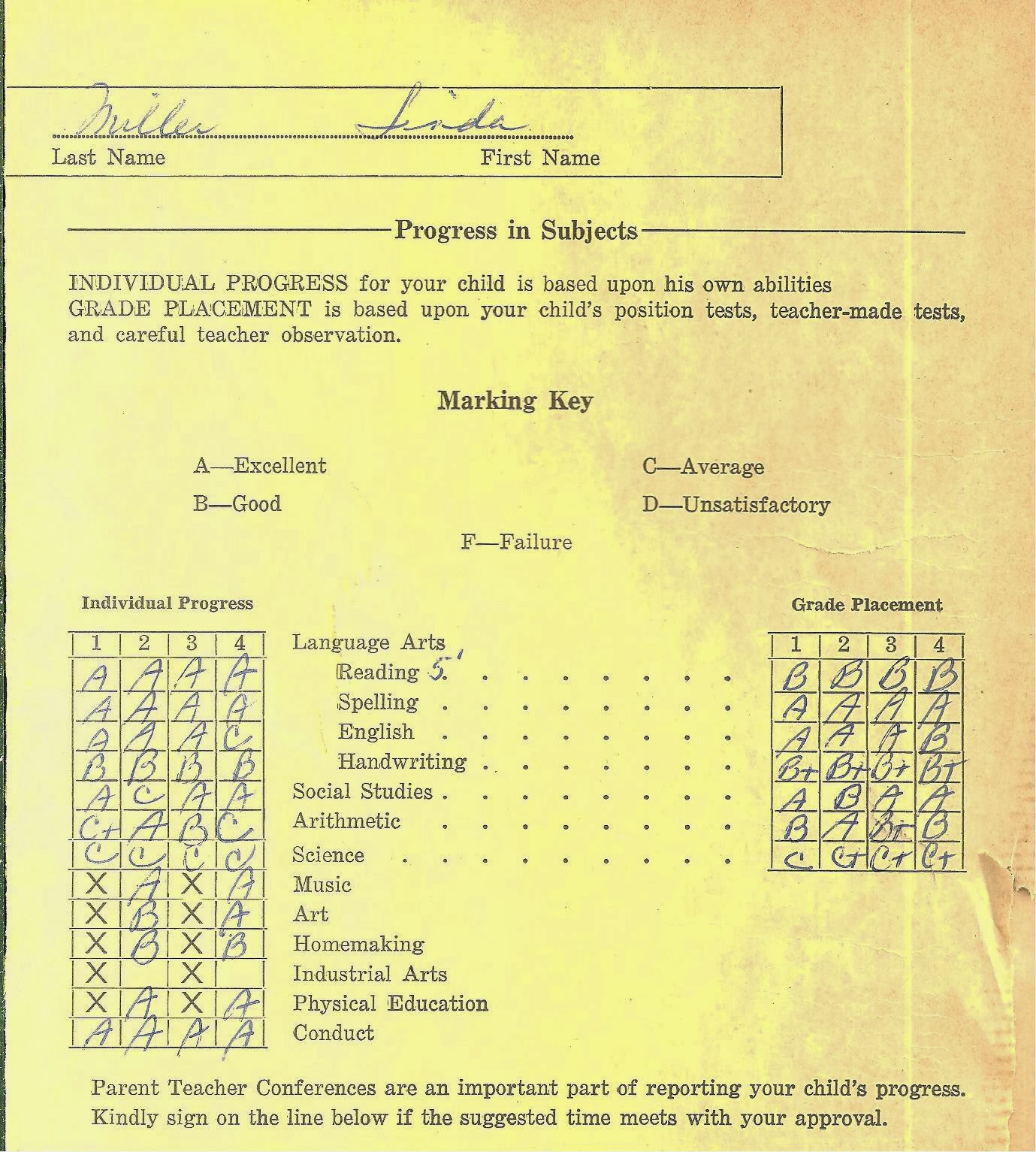 Interestingly I don't recollect a lot about fifth grade, I was still friends with Janet Engel, but a new girl moved into the neighborhood named Betty Ann Cleary and we just hit it off and I spent many days after school at her house. She was from a large family and lived in a two story house, whereas we lived in a little cape cod. Sometime around 5th grade I got the measles and not listening to my parents, kept curtains open so the sun could shine in and continues reading - it would later be said to be the cause of my needing glasses.
My sister and brother were growing older and now the three of us were sharing a room. I remember when my parent set up the bunk bed, my sister climbed onto the top and promptly fell off - needless to say, I got top bunk. We had a screened in porch right off our bedroom and there was a lovely glider that  you could make into a double bed of sorts - i spent many hot and steamy summer nights sleeping out there. 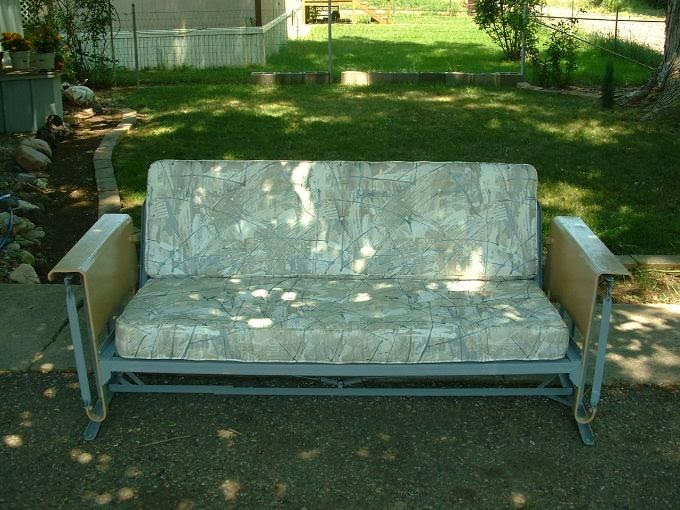 I had a huge crush on a boy named Jon Card. He was an Air Force brat as Mitchell Field Base was in our school district.  Jon was particularly talented. He did great imitations of Elvis and called himself Elwood Pretzel and we girls thought he was t he best. He had a great voice and we always enjoyed hearing him sing songs like Sink the Bismark and Battle of New Orleans at school talent shows. I can still hear his voice in my mind - isn't that funny?
I played clarinet in band after giving up on the violin - my grandfather thought I was going to be the next Henny Youngman, when I switched, it became Benny Goodman! By sixth grade I was playing first chair.

In sixth grade, by the second semester, a lot of my grades started slipping and no one could figure out why. Then neighbors started to complain I was ignoring them when they waved at me>  My mom decided maybe it was time I get my eyes checked. Now I have a great memory and at school when they tested us, there was always a line so by the time my turn came, I just gave them the lines I memorized. I don't think I really thought about it meaning I needed glasses, I just didn't like to do poorly on things. Yes, I needed glasses, and yes they were ugly! We got these awful cat's eye frames - like this, but in pale blue 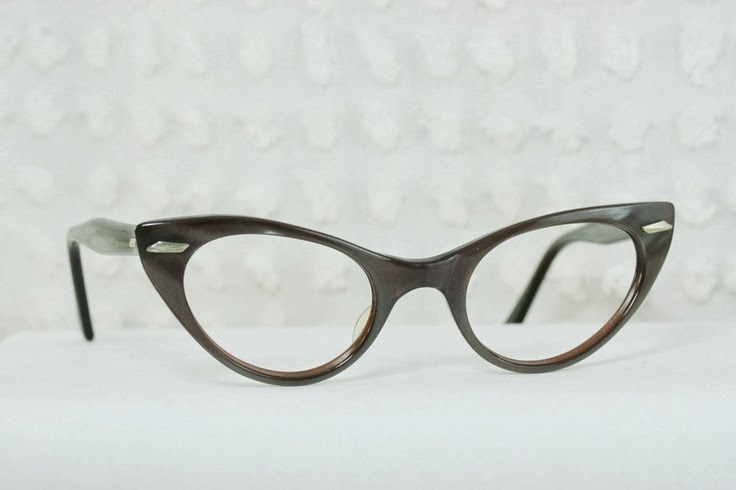 I thought they were hideous and did everything I could think of to get rid of them, but mom always found them - I even broke them, but she got me a new pair. My report card shows the change - and also those awful Math grades - I really think because I couldn't see the board for a semester or two I lost a lot of what I needed the next year in what was called New Math. 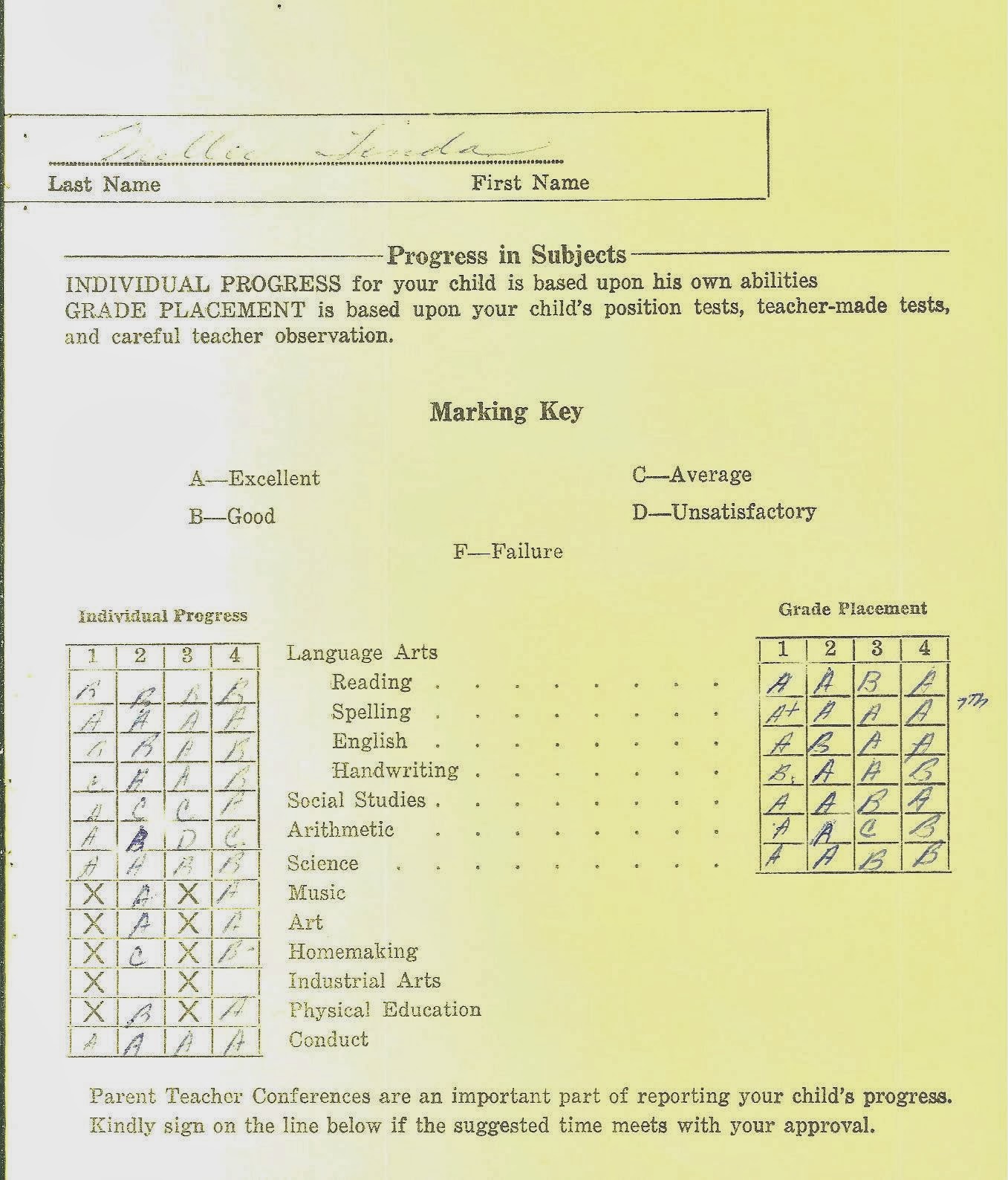 I did love the front of my report card which I never really looked at until I took it out to scan it -look what it says at the bottom in a message to parents - might be a good thing to think about today. 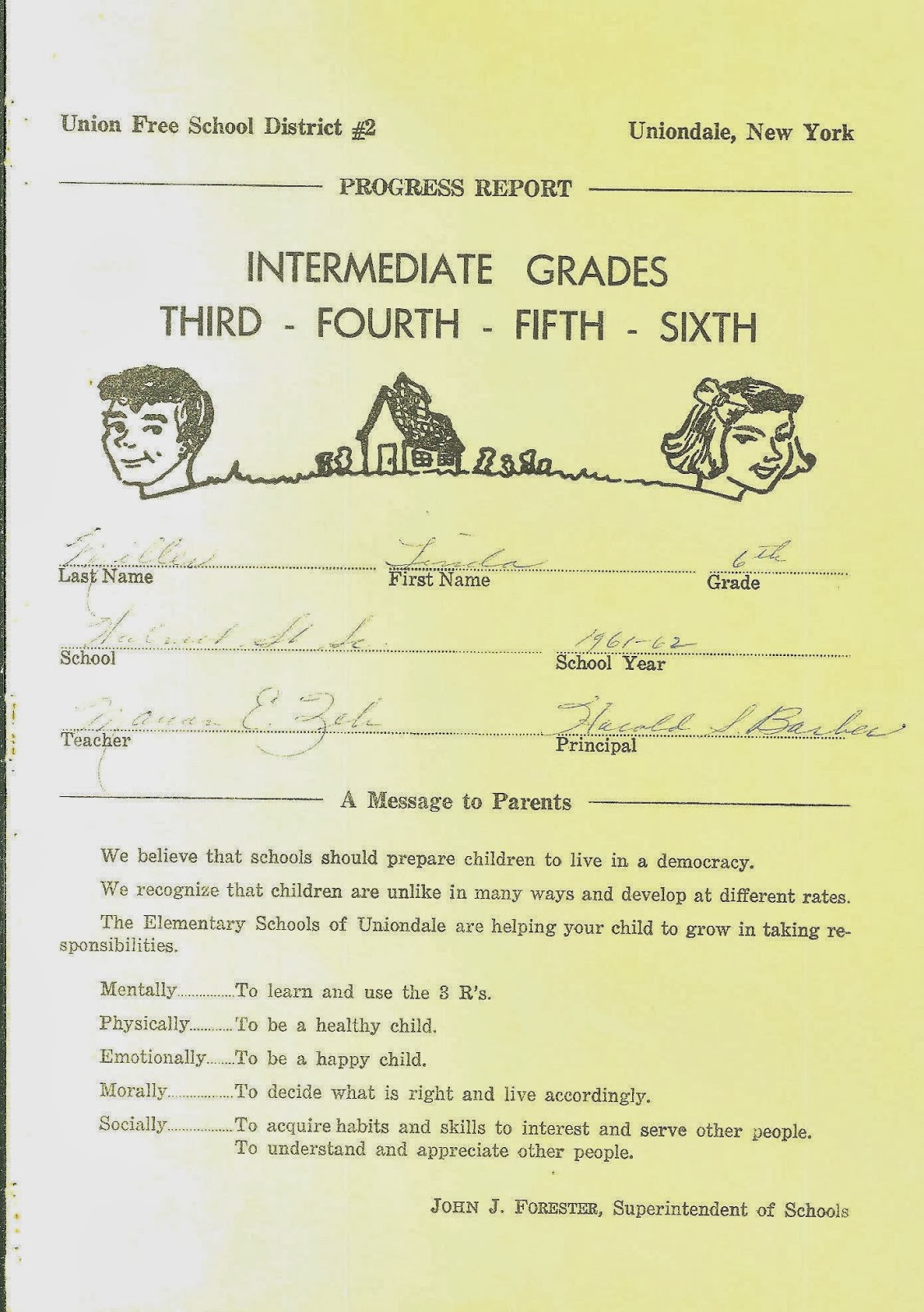 Towards the end of sixth grade, my parents made the decision to move out to Suffolk County and buy a bigger home. We spent many weekends going out there to see how the building was coming along and Betty Ann often came along. My dad was very particular and checked every little thing. He even marked off trees he did not want cut down. Like my friend Janet, Betty Ann also liked to sing and was picked to sing for our graduation. She sang an old Irish Air - The Last Rose of Summer, which I fondly remembered and sang to my children and now my grandchildren. It always seems to quiet them down to go to sleep! We had a field day just before graduation and I did pretty well, winning the 40 yard dash and coming in second with Betty Ann in the three-legged race. Somewhere along the line I lost what little athleticism I had and never won anything physical again!  I was devastated when I learned we were moving the day after graduation which meant I would miss all the parties. It took me a long time to get over that. Betty Ann and I had big plans, but sadly they went out the window. We stayed friends writing back and forth until senior year of high school when I went to visit and see all my old friends. The next year she was off to college and we lost touch.

The town we moved to was called Hauppauge which was an Indian name that meant sweet water. It was so different compared to Uniondale. While there were neighborhoods, there were no stores, restaurants - nothing unless you went two miles into town by highway, which at 11 I was not allowed to do. Even at that, there was only a small 5 and dime store, a luncheonette, movie theater and Grants. The post office was in a small house and the library was also in a house. I was used to  lots of things to do and places to go, so it was a huge adjustment. I remember seeing a Sheriff's car, which I had never seen in my life, and thinking, Oh my gosh, we're in Mayberry RFD with Sheriff Andy and Opie! Happily though, I eventually made new friends and was happy in my new home -with my OWN room!