The Story of Lambkin 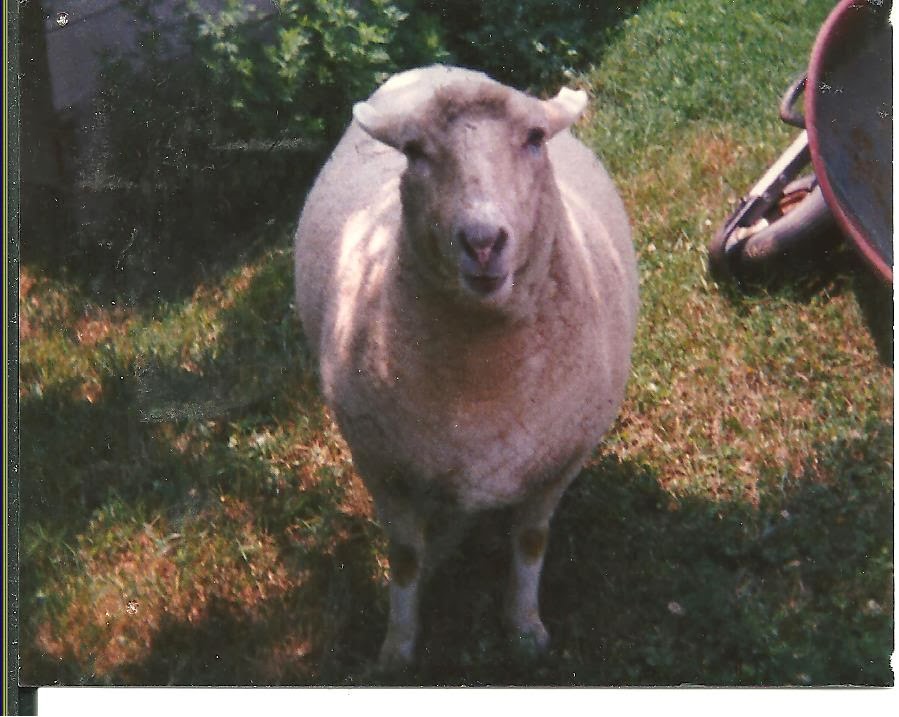 When our kids were younger, we had them join 4H so they could enjoy activities and learning experiences. We rented a house on a mushroom farm along the Hudson River, so we had plenty of space for animals. Hubby had built a small building that our kids ended up using to play Cowboys and Indians (and before you go all crazy on me, my hubby is part Indian!). They had drilled some holes for their guns to "shoot" through and it had a drop down "window". We already had guinea pigs and Lop Eared Rabbits, a Lab Mix and a Border Collie, but no larger animals. My daughter T desperately wanted a little lamb. The little building would be a perfect place to house one.

We found the perfect lamb on a farm nearby and T bundled her up in her arms and "carried" her home in the car. She was a Corriedale and she named her Violet Lambkin, but everyone just called her Lambkin. Like most of our animals, she was quirky. I think perhaps she had been removed from her mother a little early and found a new mother at our house - a spring horse the kids used to ride on. 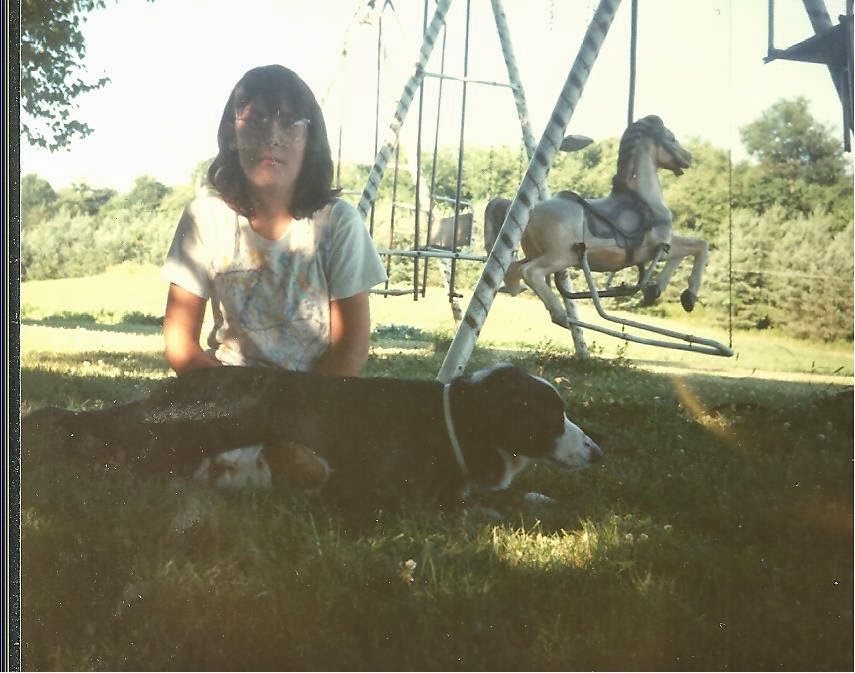 You can see it in the background of this picture -except, by the time Lambkin came, it was hanging in a tree and missing its tail and a leg...or two. It didn't matter to her, it was mommy. The very first day she ran to it and tried to nurse - it was so sad, but so funny! That evening as we attempted to get her into the shed, she bleated and bleated. We couldn't figure out why until we realized she was crying for her mommy. SO, the horse was unhooked from the tree and hung in the shed. She stopped crying and all was well. The next morning we realized we weren't going to get her out of the shed until mommy came along. So began years of taking the horse from the tree to the shed and back again. She never stopped loving it! 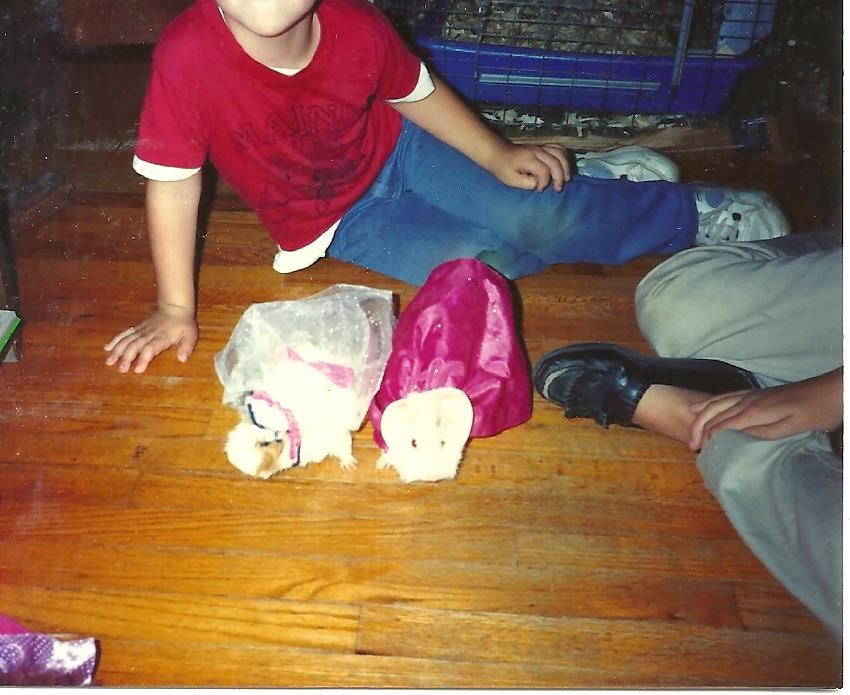 The kids all enjoyed her and T thought it would be fun if they taught her to play soccer - which they did! She would butt the ball with her head and go running after it and butt it back to whoever was playing with her. The next trick was to teach her to respond to the word up which she readily did. T had a great idea while they were making videos of their guinea pigs (The Lone Guinea Pig), to have her put her head through the tire swing - they got her to bleat and then said, "Metro Goldwyn Lambkin"! I have a video of it that I wanted to share, but I can't get it to load.

One day we heard bleating on the porch and poor T came in crying with something in her hand. Apparently Lambkin had tried to play with our Border Collie Flower and unwittingly broke her toe. Flower responded by biting a piece of her ear off - which is what T had in her hand. Tearfully she asked hubby could he please sew it on and how was she going to show her in 4H with part of her ear gone! Sadly, that was not something daddy could do and he told her many lambs had notched ears and left it at that. (If you look at the photo on top you will notice the notched ear on the right) She never did show her. I think the only problem we ever had with Lambkin was that she got so good at butting the ball, that she started thinking it was funny to butt my son when he came out - if he rode his bike, she butted him off, if he was running around, she would run after him and butt him - one of those moments when you understand there are some things you shouldn't teach animals! It got to the point that he wouldn't go outside and play and started to gain weight, so that was when we decided to find a new home for Lambkin. We found a lovely family looking for a pet for their farm and they came by to pick her up, but they could not get her to go into the trailer. Then we all laughed and showed them our really sad horse which now had only one leg and part of its face. We took it out of the tree and put it into their trailer and Lambkin immediately ran inside it. I often wonder what became of her and the horse, but that was the official end of 4H animals at our home. 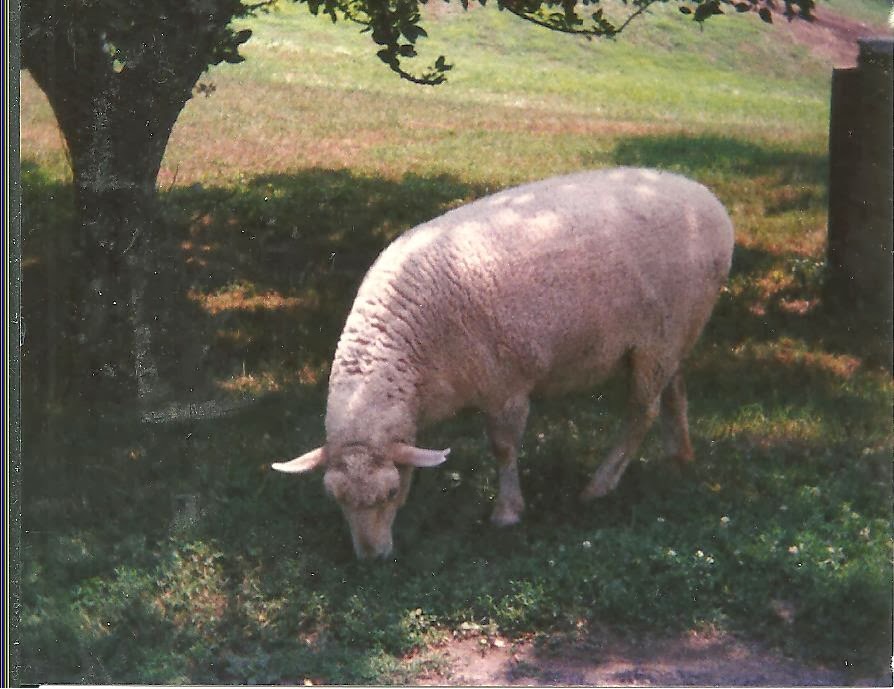