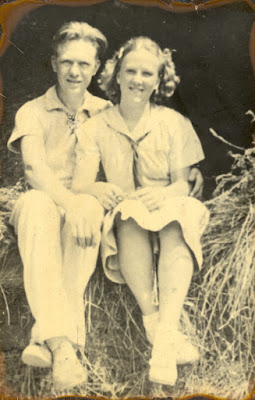 Above is a photo of my grandfather Robert Haindl and grandmother Eleanor Riess. I love this picture and have always called it their wedding picture. I am not sure if it is or isn't, but its the one photo of them that embodies their love for each other.
Eleanor Riess grew up fairly privileged. Her father Peter was a wealthy furrier with his own company. There are many photos of her and her sisters at a young age with beautiful fur coats from their dad. During the depression they pretty much lost everything other than the apartment building and house they owned. She was a smart girl, but a bit on the rebellious side. She dropped out of high school, not uncommon in the 1920's, and found a job. 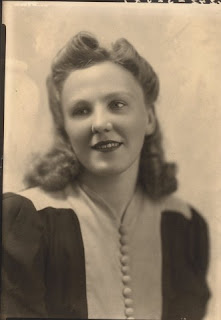 Robert Haindl grew up in a family that did well also although not as well as Eleanor's family. Rob however, like Eleanor had a rebellious streak too.  He also did not finish high school and instead apprenticed in his father's butcher store.
He enjoyed hanging out at the local park playing baseball with his friends and Elly and her friends used to watch his team play. When she first met him, he thought she was cute, but she thought he was a jerk! He kept pestering her until she finally went out with him. She was all of 16 and he was 19. Her mother did not like him at all. She wanted her girls to marry men who would be well to do so they wouldn't have to scrimp and save as she was now doing. She would warn Elly that if she married him, she would never have money!
Of course that, as it would be for most young girls, only made things seem more romantic. 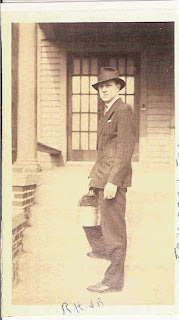 It didn't take long for them to hatch a plan to run away and get married.
Since she was underage at 17, they decided to ride up to Greenwich, Connecticut where she could get married legally without her parent's permission. They drove up on Sunday June 7, 1931 just a few weeks after she turned 17 and got married. I am not sure if she told her parents right away, but I do know my great grandmother was steaming when she found out! She told her, "You made your bed, now you lie in it!" Pretty harsh words, but in time she came to love Rob, and although he and Elly never had a lot of money, they were married until he died in October 1988. They had four children together, and 16 grandchildren. By the time Elly died in 2002, there were 11 great grandchildren. 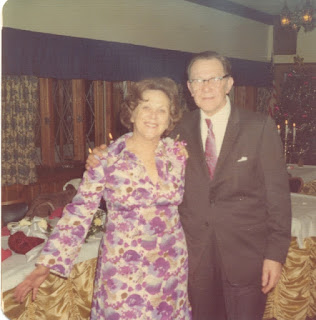