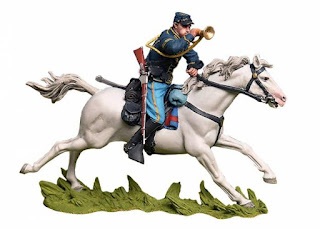 Select an ancestor who served in the military, and write a letter to him or her from the perspective of a loved one on the home front. Ask about his or her health, or the conditions in the war. Read real-life wartime letters for inspiration
My pick for this is my 3X great grandfather Samuel Wray who was born in 1821 in Williamson County, Tennessee.  In 1849 he married Mary Ann Neal and moved to Paducah, Kentucky where he owned a general store in town. He joined Company C of the 12th Volunteer Cavalry as a bugler,  and also worked as a wagoner. I am not surprised at this. Considering his age, he was definitely older than most soldiers. The job of a bugler was not only to play taps, he played the calls to go forward and retreat and many other special calls that I will write about at a later date.A wagoner was in charge of getting supplies to the troops. That didn't keep him safe, he was injured at the Battle of Cynthiana.
March 30, 1864
Dear Sam,
I am patiently awaiting your next letter, I know how hard it is to get mail through the lines. Things have been difficult here. The Confederate Army led by a Major Forrest came in and stole many of our horses, mules and supplies and destroyed what they didn't take. They also attacked our fort, but they were repulsed. The sad thing is we lost 90 of our brave men.
When I see things like this I have a great fear for you and your life. How do you fare and where are you? Your last letter had you in Lebanon, Kentucky, are you still there? The store is still in its rightful place despite all the fires at the dock during the siege. There were gunboats on the river shelling us with their artillery and several places in town are gone, we were mighty lucky our little store survived.
Are you getting enough to eat? Is there sickness in your camp? Every day we hear of young soldiers dying of sickness because they are not getting enough victuals. Has this happened in your company? The children are doing well. William is a big help in the store and Annie is as well. We are so lucky to have such well behaved children Sam.
There is not much else to report. I pray God is with you and keeps you and your fellow soldiers safe.
With love and affection,
Mary Ann 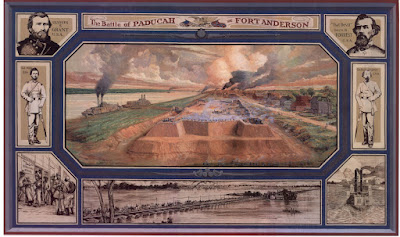 Battle of Paducah as seen on the wall along the riverside in Paducah
Posted by linda lemons at 7:25 PM