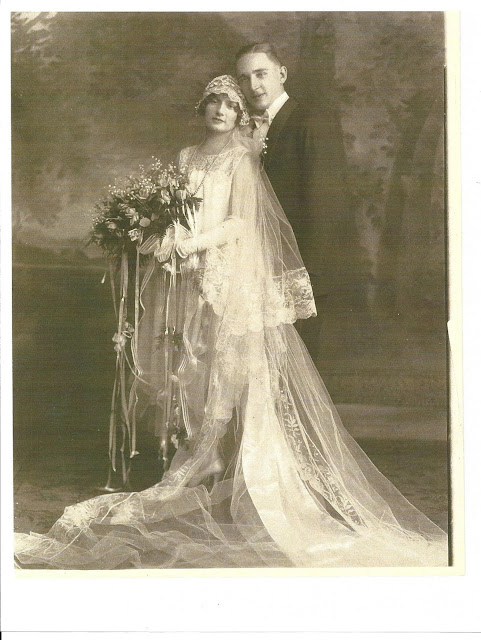 I am choosing my dad's parents for this, mainly because of the lovely wedding pictures!
Mabel Nancy Schloman, daughter of Henry Garry Schloman and Lillian Schneider married Albert August Miller who was  the son of August Miller and Karolina Amelia Barie. Both were born in New York City and eventually moved to the Bronx. I am not certain how they met,  and that is a pity, (it is why you should ask questions of your family now while they are still here!) I know lots of little stories about each of them, but not their love story)

Suffice it to say they fell in love in the mid 1920's and married in 1928. They were Lutheran as they were German, so there was no need for banns to be read. I do have many photos of them sharing days and outings with their families so I suspect there was a lot of group dating going on - safety in numbers as they say!

Mabel came from a small family. She only had one sister named Edna. Al was from a larger family having sisters Marie, Margaret and Augusta and a brother Carl. 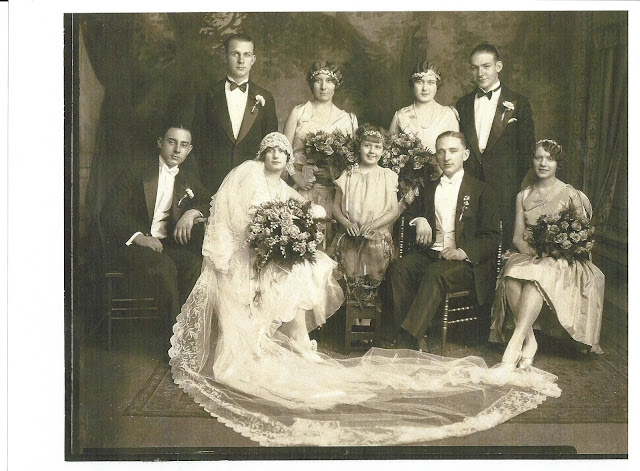 I love this picture - the beautiful gown she wore and the large bouquet of flowers with the streaming ribbons are so indicative of fashion in that time. Her sister Edna, maid of honor sits next Albert, while his brother Carl,  the best man sits to Mabel's right. I know one of Al's sisters, I believe Augusta is behind Albert, I am not sure if the other woman is related somehow to Mabel but her facial structure is similar!
Being German, I imagine the wedding was full of polkas, lots of beer (August was a brewer) and German songs like Ein Prosit (A toast, a toast, to cheer and good times)and certainly the song Du, Du Liegst im Herzen (you, you are in my heart). There would surely be traditional customs.
After the ceremony, the bride and groom would saw a log in half to symbolize overcoming life’s tough challenges together and the guests would throw rice at the couple. It is said that whatever amount stays in the bride’s hair is the number of children the couple will have.

I do have to share one story - when Al and Mabel came home from their honeymoon, they found their friends had spread limburger cheese on their radiator and they spent the night cleaning it off!
Posted by linda lemons at 4:54 PM