A Woman's Right to Vote 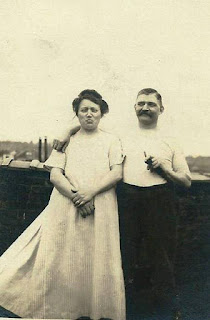 The challenge today is to write a letter as if you were your ancestor telling about the first time you voted. I am choosing someone from my dad's side this time. His grandmother Amelia Karolina Barie came to America in the late 1800's and married August Joseph Miller in 1896 in New York City. I will be writing as Amelia to her younger sister Pauline who was still in Germany at that time.

Dear Pauline,
I just had to write to you to tell you about a wonderful experience I had today. If you remember, earlier this year I told you that America passed  the 19th amendment to their constitution which gave us women the right to vote in elections. I have been so excited since it passed in August thinking about who I would cast my precious vote for. I  have been reading the papers daily and talking with August about the candidates. I don't want to vote for frivolous reasons, this is too important to be blasé about. I don't want other men laughing at me because I am uneducated in the way elections are run and am grateful August agrees with me in this. We have two parties to choose from, each one picks the candidate they think will best run this country. This year it was Warren G. Harding on the Republican side and James M. Cox on the Democrat side.
The Republicans met in Chicago, Illinois for a convention to elect who would be their candidate. There were several men vying for the position and the people at the convention brought it down to one candidate; the same happened for the democrats only they met in San Francisco, California. After that, both men traveled around the country telling people what they intended to do if they became president. Many people felt things had been too progressive in the country and didn't like the foreign policy of the current president. I think that made it difficult for Mr. Cox to get support. On the day we were to vote, we had to go to a local polling place to cast our ballots. It was interesting to see who was in line there. I think a lot of the men were still a little irked that we women could vote, but there were no problems, just maybe a few men staring at me! August and I voted for Mr. Harding and do you know what? He won by a landslide - 37 of the states voted for him. I must admit, that made me quite proud, to think I voted for the man who actually became president of this great nation I live in.

Well, I think that is the biggest news I have right now. I will write again soon. I am looking forward to hearing from you again soon!
With love and affection
Amelia