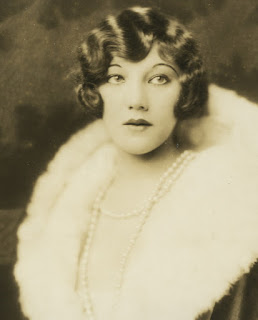 My great grandfather Haindl's niece was a Ziegfeld girl. Her name was Elsie Behrens and she came to the US from Germany in the early years of the twentieth century. She was a beautiful girl with dark blonde hair and blue eyes. She studied dance in Germany under Albertina Rasch and must have caught the theatrical bug as she worked to break into show business here in the US. She never made it big, but she did work with a cavalcade of stars -

Fred Astaire, Marilyn Miller, Buddy Ebsen, Bob Hope, Rudy Vallee, Ethel Merman, Bing Crosby, Sydney Greenstreet, Fred MacMurray - what a list! I imagine she must have been thrilled to be working with these people even though they were in the beginnings of their own careers. 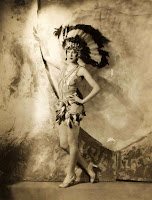 I think once she was clearly ensconced as a Ziegfeld girl, she must have been to many parties and soirees which would mean she would have been up to date on all the latest in fashion - one could not be one of the girls and not dress the part at all times. She was close to Ziegfeld and one day when they were out riding in his car, she mentioned being born in Germany. Well, Flo was shocked as the girls were the "great American beauties". He immediately drove her to the courthouse to start the process of her becoming a citizen! 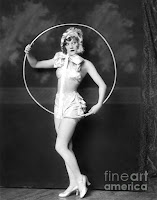 There are a few newspaper articles about her, the above story is one of them and she is mentioned as attending a wedding of a Ziegfeld girl as well. She herself married an up and coming businessman named LeRoy Franck and her wedding was covered in the papers. After she retired from dancing in 1935, she still appeared at many places for fund raisers. Sadly she and LeRoy split up after having 2 children and she died in obscurity in Florida. I wrote to her grandson to see if he was willing to share anything with me, but he never replied.

I think it would have been interesting to know her - having been drawn to theater in my  younger years I like to think we would have had something in common! 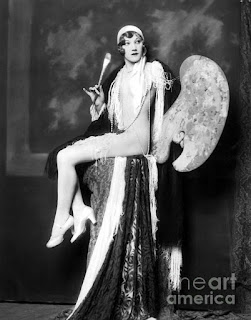