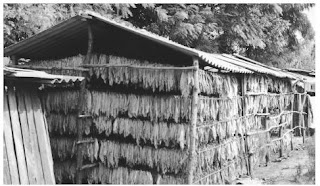 Who was your ancestor’s best friend? How did they spend their time together? Write a paragraph or two about an adventure they had, real or imagined based on what you know of their childhood, time period and places they lived


Today’s ancestor will be Roy Cook, my husband’s paternal great uncle and his twin brother Coy who was his best friend for his entire life.


Roy and Coy’s family worked on a tobacco farm in Robertson County, Tennessee.  It was a hard living, but not uncommon in the very early twentieth century. Many people could not afford their own piece of land to farm, so they worked on the large farms that surrounded them. They lived in a small dirt floored cabin with their parents and 10 siblings. They were the youngest being 20 years younger than their oldest sibling. They were spoiled by all of them.

One day while they were helping their dad on the farm, they decided to see if they could swipe some of the tobacco for a smoke. What they didn’t understand at that age was that the tobacco was green and needed to be cured. They hid their big leaf under Coy’s shirt and secreted it away during their lunch break.


After dinner that night, they headed outside with some pilfered matches to get their tobacco. They rolled it into two “cigarettes” tossing the excess away and worked at getting them lit. Eventually they got a bit to smoke and puffed away feeling very grown up.


It wasn’t long before they started feeling a bit queer and stumbled home very green about the gills. Pap knew exactly what they had done as soon as he saw them and after they got their bottoms paddled, Ma got them outside quick enough before they hurled up their dinner. Never again did they try to smoke green tobacco!!


Roy and Coy never married and spent their lives being doted on by their family! Coy died in April of 1998 and Roy, lost without his twin, died in October the same year.
Posted by linda lemons at 6:04 PM