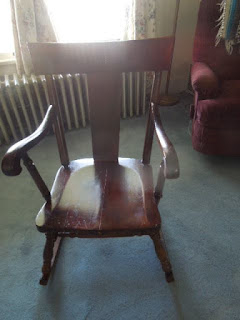 Select a family heirloom and write a narrative from its perspective. Where has it been? How did your ancestor acquire it and what would it have encountered throughout the years? What important family milestones might it have witnessed.

You might think I am just a lowly chair, not worth very much. Surely jewelry or pottery may seem more exciting to you, but I must tell you I have had a long and rich life. I was made in Germany and was so beautiful when I was finished. Though I am made of birch and not maple, I am well made for the special treat of rocking a young one to sleep. I am covered in a mahogany finish and have mother of pearl inlaid on my back piece. My seat is contoured for giving the most comfortable fit.

I was so thrilled to be brought to the new world, what an astonishing adventure being shipped across the mighty Atlantic Ocean.  When I arrived at my first home in New York, there was great excitement. A baby was about to be born. People were running to and fro to make everything ready for the tiny bundle of joy. I was put in a nice quiet room with a beautiful crib and matching chifferobe.
I was only alone for a few days, in fact the mother came in several times and sat in me and rocked back and forth practicing sweet songs. Finally the day arrived and a sweet girl named Hertha was born. Mother came in when little Hertha was crying and brought her over to me. She sat down and nursed the sweet babe all the while rocking gently and singing lullabies. Each day they used my special ability to soothe and calm little Hertha. Before long, Hertha was getting around on her own and a new life joined the family. Her name was Eleanor and she was just as sweet as Hertha. Mother always rocked her, just as she had Hertha, and some days Hertha came in and rocked in me all by herself. Yet another girl arrived, this one name Florence.  What a busy family we had become. Over the years as the nursery gave way to little girl's bedrooms and then young ladies bedrooms, but I still had my place in the corner of one of the rooms. Fairy tales were read whilst rocking, books from elementary school and even more grown up books as the girls entered high school.
One day, Hertha stopped coming home. She had found a husband and moved out. Not long after, Eleanor got married too. When she found she was expecting a child, she came to her mother and asked if she could bring me to her house to rock her baby in and so my residence changed. Over the years I was pleased to be used by yet another Eleanor, Phyllis, Ethel and Robert and then I sat alone for a long time unless the new young family's came by and then I would be employed to rock grandchildren in while they were visiting. Many more years passed and sadly I was relegated to the basement and there I stayed for a long time....until one day Eleanor's daughter Linda was expecting a little bundle and asked if anyone was using me. "No, her grandmother said, would you like it?"
"Oh yes, she replied, it's just what I have been looking for." So I came up out of the basement and was put in a car and driven to the state of Illinois, but that was not my final destination, oh no! The young parents were in the process of moving to the country of Canada, so I was loaded into a moving van and taken to Bracebridge in Ontario. Amanda was born and settled right in as her mother rocked her in me. She too sang beautiful lullabies as she nursed and rocked her. Before long Tiffany arrived and I was happy to be of service.
It was time to leave Canada and move back to the United States and I found myself once again in New York, but a terrible thing happened to me during the move. The load in the moving van shifted and my seat was broken in two. For many years I sat in a garage waiting to be fixed, but it seemed there was no time for me and a new rocking chair was brought in to help with the newest addition.
I sat there for fifteen years and then moved with them to a new town. I think they kept planning to fix me, but didn't have the wherewithal to do it. I sat in the new house's garage until one day fairly recently, I was pulled out and given to a man for repair. This man was a wonder with all things wood. I was amazed sitting in his workshop at the beautiful things he made. Finally, one day he started working on me, carefully fixing my seat and all the loose parts that I had. The family was so excited to see me back healthy and whole, because now they have grandchildren who can be rocked in me once again.